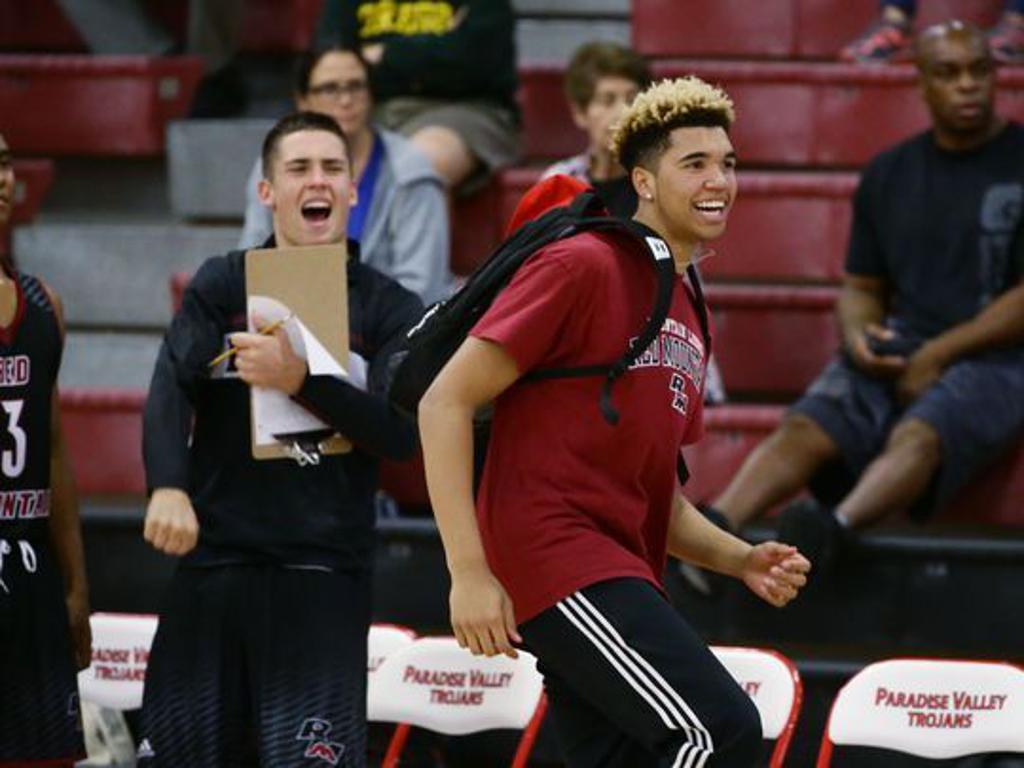 Statement for Arizona Player of the Year Honors

As the 2017-18 hoops season in the Valley of the Sun tips to the second half, it certainly appears that this may be somewhat of a down year as far as team play.  Yes, there is (Phoenix) Shadow Mountain with its national ranking in 4A and defending state champions (Phoenix) Sunnyslope in 5A but that’s about it as far as impressive “teams” go.  That doesn’t there isn’t some strong individual talent and in my book (Mesa) Red Mountain’s (2018) Timmy Allen 6’6” (UTAH SIGNEE) is the brightest star.

Allen is an automatic 30-per game player who is strong in all phases of play.  He has a PAC 12-ready body and carries himself with maturity and confidence.  Although his Lions team is only 10-7 (3-3 against out of state teams) Allen has stood out in every game.  His jump shot may need a little “tuning” when he arrives in Salt Lake City and almost everyone’s ball-handling could be improved, but Allen will contribute as a freshman for the Utes.  But Allen is a special talent.  Perhaps his best showing came in early December at the Hoophall West when he dumped 40 points on Crossroads (Santa Monica, CA) and their star (2018) Shareef O’Neal 6’10” (UNIVERSTY OF ARIZONA SIGNEE)!

(As an aside, Allen’s older brother Teddy has resurfaced after spending the last couple of years at Boy’s Town High School in Nebraska.  Teddy started his career at Mesa Desert Ridge (as did Timmy), left the team before his junior season, played ‘small school’ ball in Nebraska and is now making big news at West Virginia University as a freshman.  I say, ‘congratulations’ to Teddy on not giving up.)

In the first day of the VisitMesa.com Holiday Tournament, Allen dumped 36 on Perry (7-10) going 14 for 22 from all points on the floor (3 of 8 from behind the arch).  In the final five minutes it appeared Allen was the “go to guy” every time down the floor which resulted in double and triple team defenses.  Teammate (2019) Andre Harris 6’8” didn’t contribute much in the first half but the big fella had a strong final 16 minutes scoring 18 points and grabbing seven rebounds.  Harris, who has a decent looking stroke, is a load down low and should certainly get plenty of D1 interest.

Perry was lead by (2019) Jalen Williams 6’3” who closed with 33 points lighting it up with 7 of 8 from behind the 3-point line.  This was my first look at Williams and he certainly appears to have D1 talent.  Williams doesn’t just stand around the perimeter as he’s just as much a “slasher” who can finish with either hand at the rim.

The Pumas appear to be a team to watch as league play begins.  (2019) Bauer Bongard 6’2” (15 points) and (2019) Kyle Patterson 6’5” (just became eligible after transferring from Gilbert Christian) are solid players and with veteran Sam Duane (at least 4 state titles at Tempe Corona del Sol on his resume) at the helm Perry could be a Final-4 team.

Red Mountain bounced back to defeat Orange Lutheran (CA) 64-58 and (Scottsdale) Chaparral 88-83 before dropping the final contest to (Phoenix) Sunnyslope 59-54.  Allen had 30 points and 15 rebounds again Orange Lutheran and 31 (15 of 17 free throws) against Chaparral. 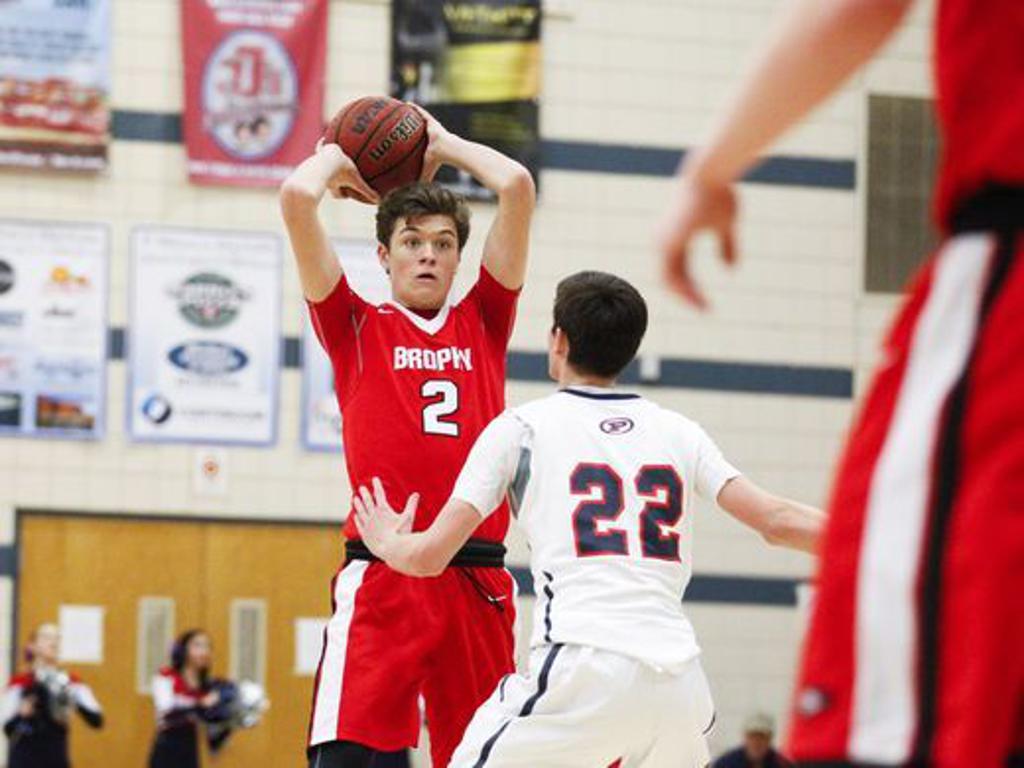 I was expecting this to be an outstanding game but it really never got started as Rancho Solano was in deep foul-trouble from the start.  Leading scorers (2020) Kiimano Holt 6’3” and (2018) Nikc Jackson 6’8” (AIR FORCE SIGNEE) both were saddled with three fouls in the first half (neither played more than eight minutes) as Rancho Solano fell behind 34-21 and was never able to make a strong run.  Jackson ended with 13 points and 11 rebounds but Holt finished with just has six points, well below his season average. (Rancho rebounded with three wins – all by more than 15 points – as Jackson average 21 points and 10 rebounds.)

Brophy (13-1) doesn’t impress you with its “basketball” athleticism but the Broncos play solid team defense, are physical, share the ball and have decent players coming off the bench.  With (2018) Jaxson Baker 6’7” (CENTRAL ARKANSAS SIGNEE), (2018) Ian Burke 6’5” and (2018) Xavier Juniel 6’3” Brophy should have enough fire-power to be there are the end of the season.  Baker had 19 points and Burke and Juniel each 12 in the Rancho game.  Brophy won their next two games but lost to an undefeated Federal Way (WA) 64-47 in the final.  Burke was selected to the all-tournament team. 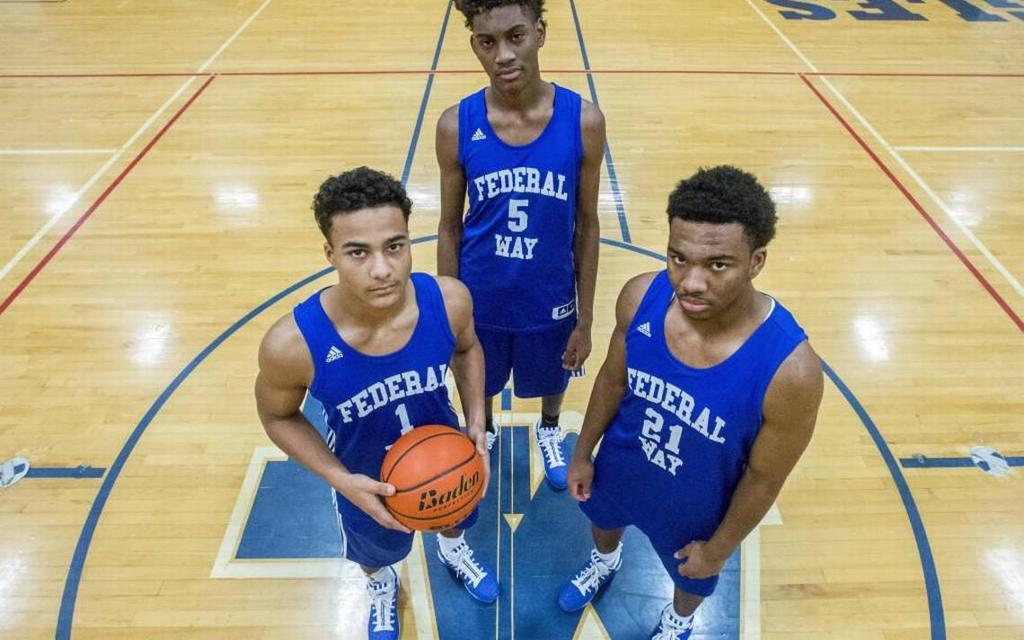 The Eagles came into the VisitMesa.com event undefeated and they had little trouble leaving the same way.  Federal Way (11-0) is led by (2019) Jaden McDaniels 6’9” and (2018) Eton Collins 6’5” and both players looked impressive against an undermanned Westview (10-6).  McDaniels is certainly a strong D1 recruit who plays all over the court.  He’s on the “thin” side but he has a good handle for a ‘big’ and runs well.  Collins, on the other hand, is a physical athlete who lives in the paint and is quick off the jump making him extremely difficult to control.   Collins can also get it off the glass and start the break off the bounce.  McDaniels had 16 points and 11 rebounds against Westview while Collins led the way with 20 and 12.

This was my first look at Westview’s (2019) D’Maurian Williams 6’4” and he looks like he has a future at the next level.  Williams has a solid floor game and plays all over the court, but he’s expected to be a scorer for Westview.  In this game, it appeared at times he was forcing shots and attempting to do a little too much.  He did make 2 of 5 threes, but 40 shots!  He also easily averaged double figure rebounds and had plenty of blocked shots.