With victories over California’s Sierra Canyon and Chino Hills

Although the Sierra Canyon and Chino Hills programs aren’t nearly as dominating as in recent years, Phoenix Shadow Mountain nevertheless made a huge statement over the weekend in the Hoophall West event notching closely contested wins to run their record to 7-0.  The Matadors opened the two-day event with an 85-81 win over Chino Hills and came back the next night with an 80-78 overtime win again Sierra Canyon.

Shadow Mountain’s five out-of-state transfers, who this summer joined returning ultra quick guards 6’1” Jaelen House (2019) and 5’ll” Jovan Blacksher (2019), have quickly turned Shadow Mountain into a top-10 nationally ranked team.  And the amazing aspect of it is that no player is bigger than 6’5”.

6’4” Antonio Reeves (2019) doesn’t look like he weighs 160 pounds but in this game he showed that he is a fearless warrior.  With House fouled-out after a night when nothing seemed to go right and Blacksher coming to an offensive halt after scoring 17 first-half points, Reeves

came through in the second-half time after time challenging the much more physical Sierra Canyon interior players.  Reeves finished the game with 15 points (six in overtime) including a game-winning three-pointer.

Shadow’s other transfers, 6’4” Immanuel Allen (2018), 6’4” Shemar Morrow (2020) and 6’4” Jalen Williams (2019), also showed they’re ready for the ‘big time’ with hard-fought performances – especially in the defensive scheme and on the glass.  Allen and Morrow each closed with 15 points.  By the spring of 2020 Morrow may prove to be the best player to play at Shadow since coach Mike Bibby starred there in the late 1980s.

The most intense and entertaining high school team in America might just be Shadow Mountain.  They haven’t been a very good free throw shooting team so far and that may factor in negatively at some time.  However, when they play in the end-of-the-year national tournament, the lack of a ‘big’ post presence may be something they will not be able to overcome.

Sierra Canyon is led by 6’3” Duane Washington (2018 (OHIO STATE SIGNEE), 6’7” Kenyon Martin Jr. (2018) and 6’1” Scotty Pippen Jr. (2018).  Martin and Pippen, sons of NBA stars, aren’t ‘complete’ players (unlike Washington who certainly is), but they do certain things extremely well.  Pippen can really shoot it and Martin, as to be expected, is a force in the paint.  Washington is a physical guard with skills in every phase of the game.  All three contributed at least 17

points each.  6’4” Adili Kuerban (2018) helped to keep Sierra in the game with 11 second-half points, primarily from the perimeter.

Chino Hills has made quite an impression over the past few years with the Ball Family making headline across the nation.  The Balls are all gone now, but Chino Hills still has a formidable squad led by 6’9” Onyeka Okongwu (2019).  Okongwu was relentless on the offensive glass and the Matadors had no chance of stopping him.  His 33 points and 16 rebounds was easily the best individual performance of the weekend’s 12 games.  Okongwu has a nice stroke to go along with his power-game and made all 13 of his free-throw attempts.  He’ll need to get stronger but he’s already an elite member in his 2019 class.

House (21 points) and Blacksher (18 points and 10 steals) were patient against Chino’s various zones and the under-sized Allen and Morrow made contributions of 15 and 10 points, respectively.  Mid-way through the third quarter, Shadow had built a 16 point lead before Chino’s 5’10” Phaquan Davis (2019) broke lose with four three-pointers.  Unfortunately for Chico Hills, the ultra-quick PG fouled with five minutes left in the game (17 points).

The Johnson Brothers, 6’7” Keldon (2018) and 6’5” Keyontae (2018), and 6’10” David McCormack (2018) were unquestionably the most talented athletes on the floor, but you have to give a lot of credit to the Lone Peak squad which was physically the extreme underdog.  I don’t believe the 2017-18 Oak Hill team is one of their historically stronger units (at least early in the season) and Lone Peak certainly could have pulled the upset.  Keldon Johnson (KENTUCKY SIGNEE) closed with 24 points primarily on taking it to the rim.  Keyontae Johnson (FLORIDA SIGNEE – football) added 20 points and was a physical force that produced some high-flying, power dunks.  McCormick (KANSAS SIGNEE) was a rebounding machine who has a college-ready body and a soft stroke (12 points).

Make no mistake about it, if you’re going to be playing Lone Park your team had better be in condition.  They will definitely be challenging for a Utah state title this winter.  6’1” Steven Ashworth (2018) and 5’10” Chantry Ross (2018) are a couple of fearless kids who are all-around players.  Ashworth (UTAH STATE SIGNEE) finished with 20 while Ross added 14.  6’7” Jackson Brinkerhoff (2018) had some solid moments and finished with 14 points mostly coming on extremely difficult attempts over or around McCormick.

Lone Peak rallied the following day for an impressive 72-64 win over (Phoenix) Sunnyslope, the defending AZ 5A state champion which returns the entire team.  I really didn’t think Sunnyslope would lose a game this year but they’ve already dropped a couple.

Although Chaparral was the host high school for the Hoophall West event, most of those attending this game were there to see 6’10” Shareef O’Neal (2018 (UNIVERSITY OF ARIZONA SIGNEE).   Yes, O’Neal is the son Hall of Famer Shaquille O’Neal.  Unfortunately, the full house didn’t see much as O’Neal failed to score in the first half.  O’Neal played virtually the entire half on the perimeter and, at times, showed some nice ball skills.  He did score 14 points in the second half.  It will be interesting to see what position he plays when he arrives in Tucson.

Chavez generally fields a solid team but coming into this game their record of 3-4 appeared to indicate it may be a ‘down’ year.  Understandably that can happen when you start two freshmen guards – 5’11” Ricardo Sarmiento (2021) and 6’2” Ty Ty Washington (2021).   Sarmiento is a willing defender but didn’t show much on the offensive side.  Washington, on the other hand, looks like he may be a future star.  Washington has good size, a nice handle and looks like he’ll be a ‘scorer’ that will give it up if the shot isn’t there.

Clark also starts a freshman guard in 6’ Frankie Collins (2021).  Collins, who scored 11 points, looked comfortable at the point and appears to have a well-rounded game.  Teammate 6’4” Trey Woodbury (2018) (UNLV SIGNEE) came off the bench in his first

appearance of the season and scored14 points.  Woodbury appeared to be a high-level athlete with an all-around solid game.

Bol (13 points) showed some athleticism and can put the ball on the floor in transition, but he also showed that his condition needs improvement.  Two trips up and down the court and he was gassed.  His overall strength is questionable too as he lost a lot of ball in the paint to the much small Desert Vista ‘bigs.’  Vanover (7 points) appears to have a good understanding of the game and a nice stroke from 15.  He wasn’t really aggressive but also didn’t have any careless turnovers.   Chaney (19 points) and Mensah (11 points) are by far Findlay’s most athletic players and they are both ‘loads’ inside.

6’3” Tyrek Chambers (2019) looks to be a prospect for Desert Vista.  Chambers has a solid body and can stroke it from behind the arch as well as defend.  Chambers had 18 points.  6’6” Wesley Harris (2018) looked good at times but going against much bigger interior players made it difficult.  Harris, who scored 15 points, is certainly one of the Valley’s better prospects.  6’8” Christian Aniqwe (2018) was active inside and should have a much easier time in the paint for the remainder of the season.  Definitely, look for Desert Vista to contend for the 6A state title in February.

The Johnson brothers were once again the featured players, but 6’5” Deon Stroud (2018) showed that he’s an elite athlete as well.  Stroud exploded for 16 points in the first quarter and showed that he can really shoot it from the perimeter.  Keldon Johnson shut him down in the middle of the game but the ‘high-flyer’ broke loose in the final period and closed with a game-high 33 and some sensational dunks.  Some school is going to get a scoring machine this spring.

6’7” Jalen Hill (2019) showed he’s a multi-position player including both guard positions.  He’ll have to improve his ball-handling, but he’s quick, athletic and he plays with intensity.  His 23 points led the way for Clark.

But, the real star in this match-up was the Pinnacle’s 6’3” Nick Mannion (2020).  Certainly Arizona’s highest rated underclass prospect (and maybe already the best player in the state), Mannion is a high-flyer, quick with the ball and a great passer.  And, oh by the way, he can really shoot it.  Based on what I saw last year and this game, Mannion has dramatically improved his outside shot and his 35 points certainly indicated he’s going to be tough to stop.  Pinnacle was without shooter 6’1” Trent Brown (2019) and his return shortly will be much welcomed in the Pioneer’s lineup.  A new player to watch for Pinnacle is 6’9” Tosh Baker (2020).  Baker is a very big kid who takes up a lot of space in the middle.  He has a long ways to go, but he also has almost three seasons to do get there.

Pinnacle will travel on December 15 to Shadow Mountain for a 6A versus 4A match-up which certainly promises to be an entertaining game with a lot of future star power. 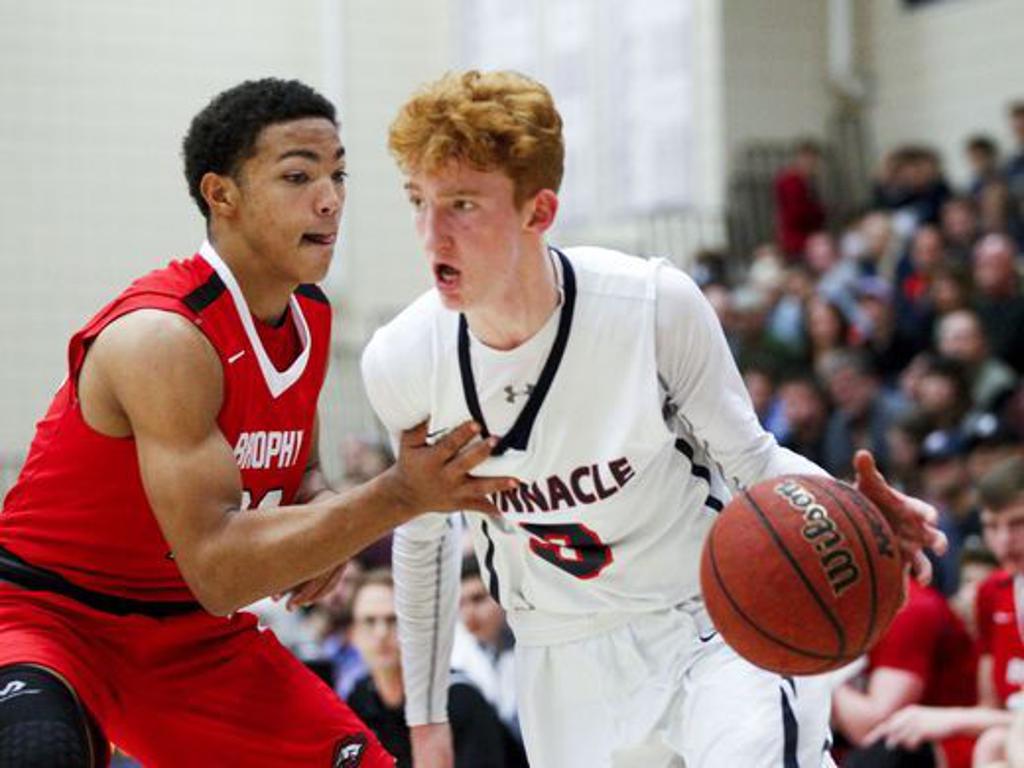