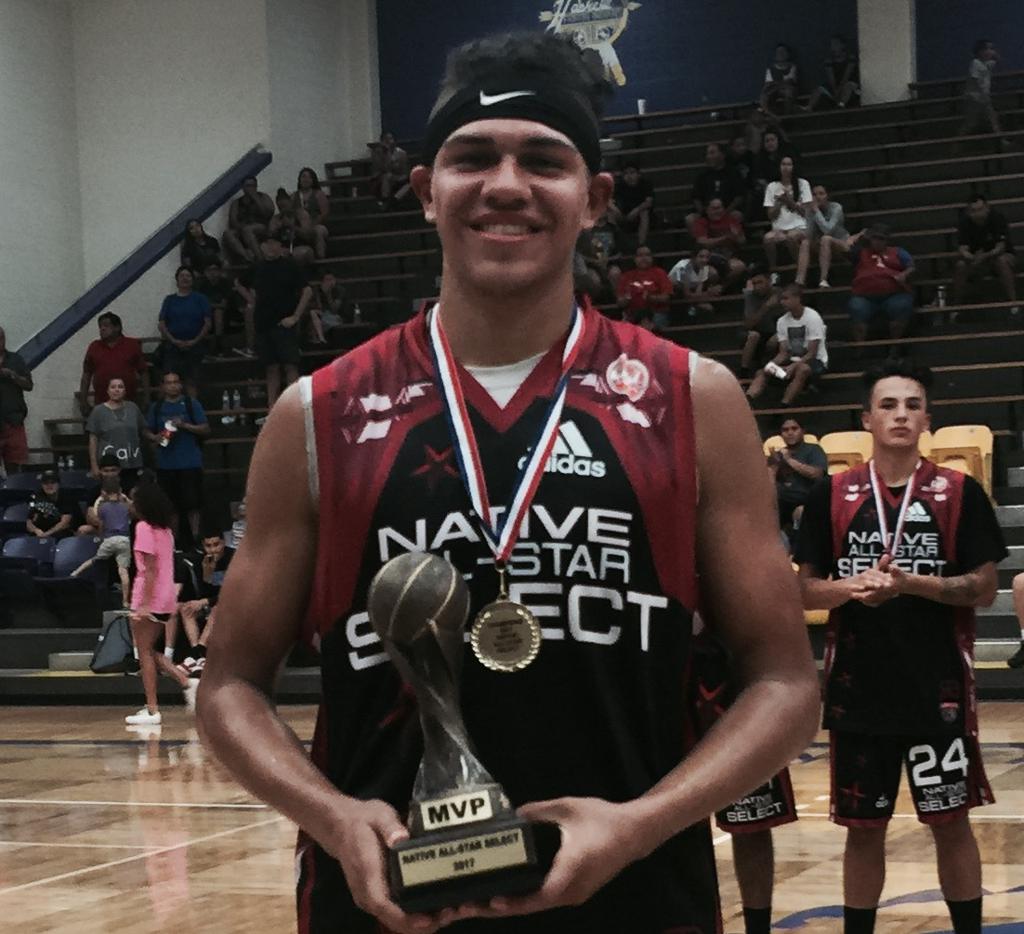 Unlike the girls game, the boys Native Top 50 All Star Game was highly competitive with the outcome in doubt until late in the game.  The Red Squad emerged victorious, 92-86 over the Blue.

All Star Game MVP, 2017 Trazil Lane (Lummi Nation, Washington) took control in transition and led all scorers with 19 points while displaying above the rim athleticism.  Lane got great support from his guard play, which bested the Blue Squad. Most games are won by guard play, which sets the table and sets the tone, leading to easy buckets.

Burries (Globe, AZ) is smallish, but intriguing in this new era of small that Boston Celtics' Isiah Thomas has made "cool".  He's cat quick and has mad range from beyond the arc, out to the NBA line.  It's easy to see why he is one of Arizona's all time leading prep scorers. He has the quickness required for D1 ball but needs to get in the weight room.

Lapointe (Winnebago, NE) on the other hand has a few tricks up his sleeve.  He's crafty and likes to go old school, Pete Maravich/White Chocolate on guys with his deft ball handling. Flash for cash...Lapointe is effective and entertaining.

McGee (Lake City/Coeur d'Alene, ID) is opportunistic. He has a nose for the ball and is in the right place at the right time.  He knows how to fill the lane in transition which leads to easy buckets and as an aside he also had the best "hair" at camp. HAHA.

The Blue Squad was herky jerky at it's guard spots,never finding a rhythm. This turned out to be the difference.. Crowd favorite, 2017 Mason Archambault was held scoreless in the first half. By the time he figured out to get to the rim to get his jump shot started it was too late for his team. He did finish with 11 second half points. There was obviously a lot of pressure on him as his father was a legendary player who went on to the Big Ten's Minnesota Gophers back in the day. Pops was in the stands and it was a weight on the kid's shoulders.  He's a good player, he just needs to play his own game.

We had to give Lane the game MVP, but the boys Camp MVP without question was whirling dervish wing, 2018 Justin Hemphill.  His motor runs hot from the opening tip and in every camp drill.  He dominates the boards on sheer will power.  He could not will his team to the Dub, but he did have 10 points and 16 boards.  IMO, he's the men's player I'd bet the farm on that will have a Division One career.

That brings me to a major point, and it's not  meant to be disrespectful to any player and their dreams. Nobody and I mean NOBODY here is going to the NBA.  The focus should be to use basketball to get your degree and be a productive part of society.  I urge players with sub D1 offers to take them.  You'll never regret it.

Don't let basketball use you.  Why not have a great, productive career at an NAIA (such as Haskell University), or a D2 career at a tough place like the RMAC (Rocky Mountain Athletic Conference)? That's what 2017 Xavier Littlehead will do at Adams State (CO).

Speaking of Littlehead, Adams State will get a good one as the lanky wing had 14 points and is extremely active on the boards and runs the floor well. It's all about the fit.