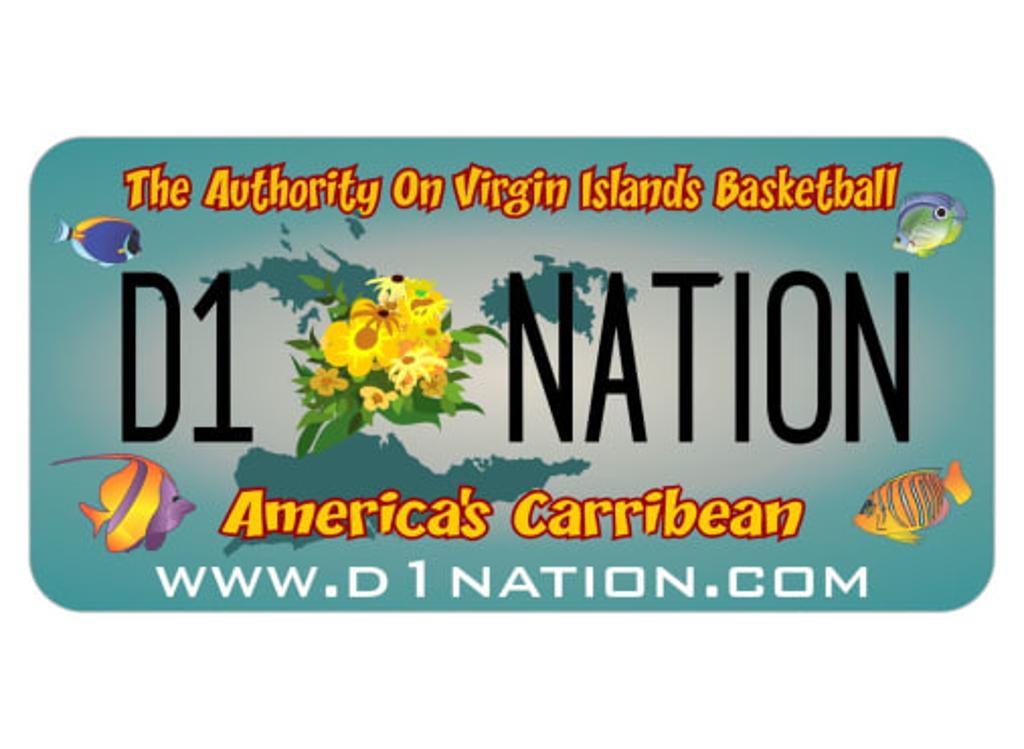 I tell young people all the time that the key to life is relationships. Be nice to others and make their lives easier and you'll be surprised at the blessings that will come into your own life. My several days here in the Virgin islands are directly attributed to this philosophy.

Several years ago when a promising young player with U.S. Virgin Island roots was playing in my club system in Texas, USVI writer David Edole communicated with me via Facebook looking for insight into him.  That player was Jordan Murphy who now stars for the University of Minnesota in the Big Ten. Having just finished his  sophomore season, Murphy had a season high of 21 rebounds vs Michigan State.  He has such a bright future ahead and will continue to make Virgin Islanders proud.

Over the last two years I've continued to develop a friendship with Mr Edole and have written a couple of articles on Virgin Island players to assist in giving them extra exposure on our site, www.D1Nation.com

In March, Edole reached out and asked if I'd come to evaluate players at the 2017 Sun Stroke Classic.  The opportunity to work with him, event promoter Rashidi Clenance, and event sponsor Tim Duncan was too much to pass up.  Special thanks to the San Antonio Spurs, Big Fundamental for doing so much behind the scenes through his Tim Duncan Foundation to help his native USVI.

So, here I am in America's Paradise watching some of their best boys and girls in what is in essence their High School All Star Game for "The Territory". 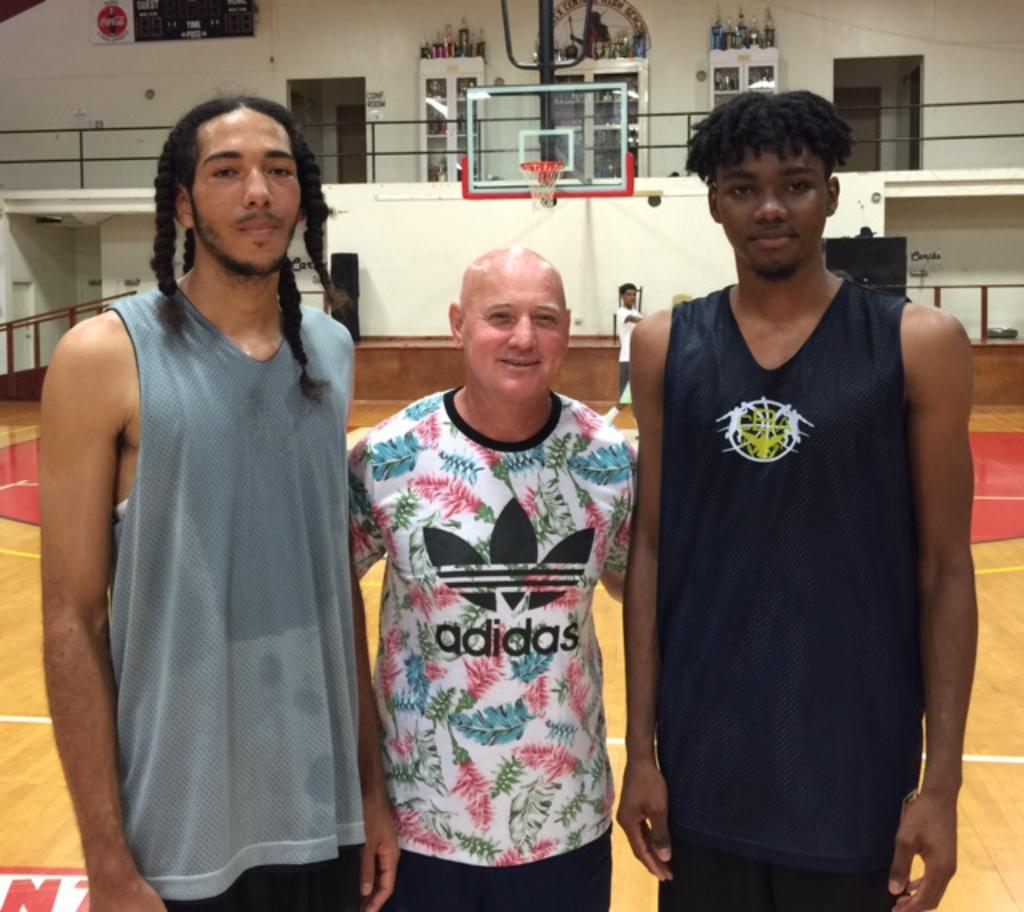 All the action was centered around St. Croix's Central High School. I dropped by early on Saturday afternoon to watch an open run between what was primarily players who'd just finished school this spring or the year prior.

Two young men stood out as having a bright future if they put their nose to the grindstone. They had size, length and were athletic.

Ilarraza has barely played any basketball, including at the high school level. He's a baby in terms of game experience yet brings several things to the table that you'd expect from someone who's played a lot more basketball.  I saw him make several passes that many big men don't make. He's a team oriented player with good vision to make the extra pass.  Currently skinny, he's extra long and plays good interior defense.

He runs the floor well and shocked me with an outstanding back to the basket move, where he drop stepped and dunked with ease over a smaller defender.

First things first, Wright has sound academics. Now to the basketball. He's as good a rim runner as you're likely to find out of a late signee. There are lots of room for skill development and progress in the weight room (for both these players) but with his length and athletic ability Wright brings things to the table you cannot teach and could really blossom with a prep school or red shirt year.

If any college would be interested in these young men, I would consider them to be NAIA ready at the moment.  With an extra year of hard work, who knows? They've got the physical gifts to do big things.

In the girls game, visiting St. Thomas pulled away after half time and thumped the host St. Croix squad 57-36. Initially it looked like a battle of the two young ladies wearing #13. It was quickly apparent that they were the two best players on the floor.

The hometown hero, Rashanika Williams, a quick PG who was able to get into the paint and cause havoc was dubbed "The Teacher" by the young man announcing the game. No doubt she was nice, a quick but undersized guard who defended with intensity and also shot it well. As her team fell behind she tried to rally them and got away from her game a little, but there's no doubt that she's talented and has heart as well.

As the game moved into the second quarter, tied at 12 apiece her opposing PG, Shauliaua Fahie showed that if Williams was indeed "The Teacher", Fthen Fahie was "The Professor".

Think a Magic Johnson style PG, big and strong.  She was never in a hurry but always got where she wanted to go. Like all excellent PG's she took care of the basketball and looked to get her team mates involved. However, when push came to shove and she needed to imprint her self on the game, she did.  She had more than her share of rebounds, probably about a dozen to go with her 20 points.

There was no doubt that she's a mid major plus prospect. It wasn't until after the game that I learned she's a Class of 2020 prospect. This quickly moves her up the charts into one having High Major status and she bears watching.

Quick, gets in the paint, left and right hand finisher at the rim. Low major D1 prospect.

St. Thomas was led by MVP:

Fahie is a big guard with a beautiful stroke, and deep range. She can hit the mid range and displayed a beautiful floater. She was clearly the best player on the floor with a "Magic Johnson" style game.  She didn't show blazing speed but protected the ball, found her team mates and pretty much did whatever she wanted to do. A high major D1 prospect.

As one sided as the girls game was in favor ov visiting St. Thomas, the boys game was just the opposite.  With the gym packed and buzzing from all the activities, the St. Croix boys gave the visitors the business. I had a chance to sit down with FIBA Virgin Islands Director Ronnie Richards (he's wearing the Baylor gear, below) and talk about some of the USVI players past and present, as well as the direction of the National Team. Both the following young men are in line to compete for spots in this summer's FIBA tournament

Two of his brightest young stars emerged as "the dudes". The 72-56 win came down to higher energy and control of the boards by game MVP, 6'8" Shakeem Alcindor (St. Croix, USVI/Educational Complex). He's raw, but an instinctive shot blocker who keeps the ball high and is way above the rim. he had 18 points exclusively on chippies around the rim. A mid major prospect or higher depending on how bad he wants it. He's the best prospect in The Territory" in the Class of 2017.

As good as Alcindor was, my personal game MVP was Zion Jones (St. Croix, USVI/Central). the 6'1" speedster was blazing fast from end to end and he set the tone for the entire team. He slashed his way into the paint and to the rim at will. He led all scorers with 20 points. At this point I don't know that Jones has a position. A tightening of his handles and the development of his perimeter shot will determine how high he goes. He's a D1 athlete though, hands down.

So, that's it.  My recap of prospects coming out of the Virgin Islands in the near future. Thanks for the hospitality St. Croix, and for an excellent event put on by Rasheedi Clenance. The festivities included rappers and local celebrities as well as the Miami Heat mascot, Burnie.