I'm excited to have Mr David Eddie, "the man" in the U.S. Virgin Islands contributing info and assisting us in getting the word out on hoopers in Paradise, the USVI. Actually because some of their preps intersect with the British Virgin Islands we will give those kids some coverage as well.

The USVI has a nice legacy of players coming to the USA and having productive college careers. Some recent female players that have excelled are I'liana Taylor (East Carolina) and Imani Tate (Albany) both of who were All Conference players. The talent is down there folks, we've just got to get more colleges down there to see it. 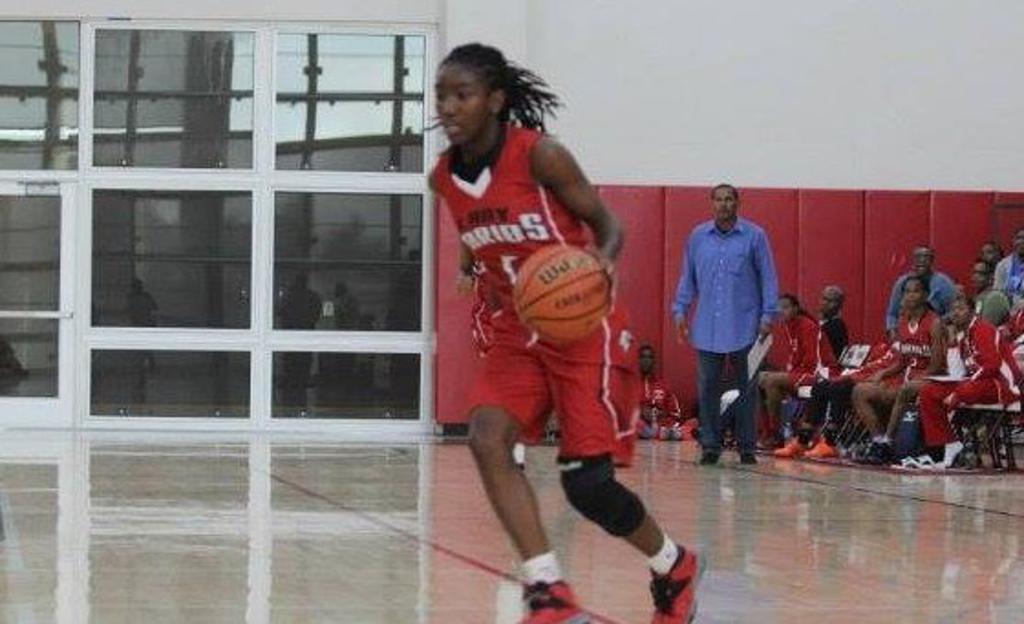 This coming season there are at least 4 USVI players in the Class of 2017 who have the talent and their minds are set on continuing to play at the college level in the USA. In addition there are young guns ready to make their mark in the Class of 2019 and 2020 as well.  Let's get to that list.  Here's the USVI Dandy Dozen, regardless of class.

What if I told you that Dani is the best player in the
territory despite not playing in one varsity game?  Visit Harbor View and watch a pickup game against the boys and you would understand. This is Victoria Hamilton 4.0, a natural talent.  A basketball aficionado who told me “She has no idea how good she is.”

COMMENT: Cool hand Luke, Hodge is never in a hurry.  She plays at her pace, controlling games despite being the only major threat for the Lady Rams.  Tropical
Fusion

NEEDS: Hodge must improve her ball handling. She should be shooting 500 game speed shots per day with 300 of those coming off one/two dribbles to the mid range (i.e. elbow, short wing, and short corner). The other 200 should be from beyond the arc. Needs to work on her right hand, and her ability to penetrate to the left and finish on the left side with the left hand.

Terrell has all the attributes of a basketball player with size, strength and height. A couple of years ago she was a member of the Virgin Islands U15 team while just 12 years old!

She has improved tremendously since that time. She
rebounds well because of her sheer size and has become a good finisher around the rim.  Could
Terrell be Coach Derrick Miller's next Martha Bodley (University of Miami)?  She is goal driven and maybe Terrell could use Bodley's story of using her size into and strength and turn it into an NCAA success
story of her own.

NEEDS: She needs to be more aggressive but that will come with age. She has the potential to be the most dominant big woman in the territory but has to play more games to continue to develop her basketball IQ.

COMMENT: The second option on her team has a summer of work to do. Nicholas presently uses her size to get to the basket and has some scoring
outbursts for the Lady Rays.

NEEDS: Conditioning. She should be shooting 500 game speed shots per day with 300 of those coming off one/two dribble to the midrange (i.e. elbow, short wing, and short corner). The additional 200 should be from beyond the arc. Needs to work on her right hand, and her ability to penetrate to the left and finish on the left side with the left hand. Her court awareness could get better and her on ball defensive skills could improve.   Nicholas also needs to do speed drills.

COMMENT: The Robinson effect will be in full bloom this season.  Last season after the Antilles Hurricanes reintroduced themselves to the territory, Robinson was the only standout.  She has legitimate post moves but
rarely used them because she had to do everything for the small private school. She missed her first two attempts wildly at the All Star Game but showed signs of what’s to come.  Strong for her size but could
definitely benefit from some added weight/muscle.

NEEDS: Her defensive skill set needs to improve, she is always in foul trouble.  She should be working on her ball handling and jump shooting off the pass (beyond arc and midrange) and off the dribble
(mostly midrange and at the rim). Could be a very strong 4 if she develops her ability to shoot off the pass and dribble facing the basket. She should be shooting 500 game speed shots a day split evenly between off
the pass and off the one/two dribble mid range.

COMMENT: Opposing teams usually play her for the drive and still have trouble with Cook. She can use her shiftiness to get by defenders to finish. She is the best ball handler in the territory.  She can go left or right, it does not matter.  Her 15 points off the bench last year forced the benching of a previous senior starter. That was impressive! Her quickness
allows her to play in the passing lanes that lead to easy steals and break away baskets.

NEEDS: She does not have the text book jump shot like Klay Thompson. She has to decide which hand she is going to shoot the basketball with.  Weight will always be her issue as she needs to put some on. That in turn should improve her defensive ability. Offensively, Cook should work daily on her midrange and three point shooting. In particular, off one (maybe two) dribble. Pull up jumpers at the elbows, and off screen and roll, etc.. She should be shooting at least 500 jumpers a day (all at game speed).

The Draymond Green of the Virgin Islands.  Lake is a jack of all trades but a master of none.  In short spurts, she has shown the ability to pass, shoot, and rebound but has not put it all together. In the All Star game her rebounding totals almost equaled the output
of Anisha George, who signed with Moberly Area CC (Missouri). She has the ability to finish a bang-bang play and to initiate offense from the high post.

The ship that is CAHS basketball falls on the broad
shoulders of Benjamin. Her jump shot has improved tremendously and has led to several high teen games. With Sherrelle George completing hereligibility, Benjamin has to demand more from her teammates as well as produce personally.

COMMENTS: Donovan was Central High’s Manu Ginobilli.  Donovan could have been a starter but when she came in from off the bench other high
schools now know to ‘fear the three’.  The best shooter in the territory would regularly throw in four or five three pointers a game and did not need much space to get it off.  Coach Donald Bough held back the scoring machine for much of last season but expect him to let
her run free this season.  The scorer could be found playing basketball in Harbor View with the boys playing 21.  That means she is about to break down defenders with her 1-on-1 game. Donovan has to learn to transfer her outdoor game to the indoor, structured variety.

COMMENTS: The most athletic player in the Virgin Islands.  Liburd usually comes up with the 50-50 ball and is a good rebounder both offensively and defensively.  She's strong for her size but could definitely benefit from some added weight/muscle. She usually gets her buckets by always playing around the basket, which is due to her very generous vertical inch leap.

COMMENT: Williams offensive game has finally come around.  She was knocking down three point shots (in all star game) with consistency and still maintains ball control. She is the best point guard in the territory. Her strengths continue to be her court vision and tight handles. She was named First-team All-Paradise, an improvement from last season's second team nod.

Williams put on a total show at the Virgin Islands Hoops Classic All Star game. She blocked shots, scored, stole, passed and even coached her team on to victory. She was even named to the All-Paradise First Team for the second year and should be a shoe in for that distinction after this coming season. Her mid game jumper that she takes off the dribble is on its way to becoming automatic. Rashanika is Jendeyi’s back up but could assume point guard duties in a seamless
transition.   Although she was not asked to shoot three pointers, she is totally capable of knocking it down.
Getting stronger is a must to be prepared for the next level.