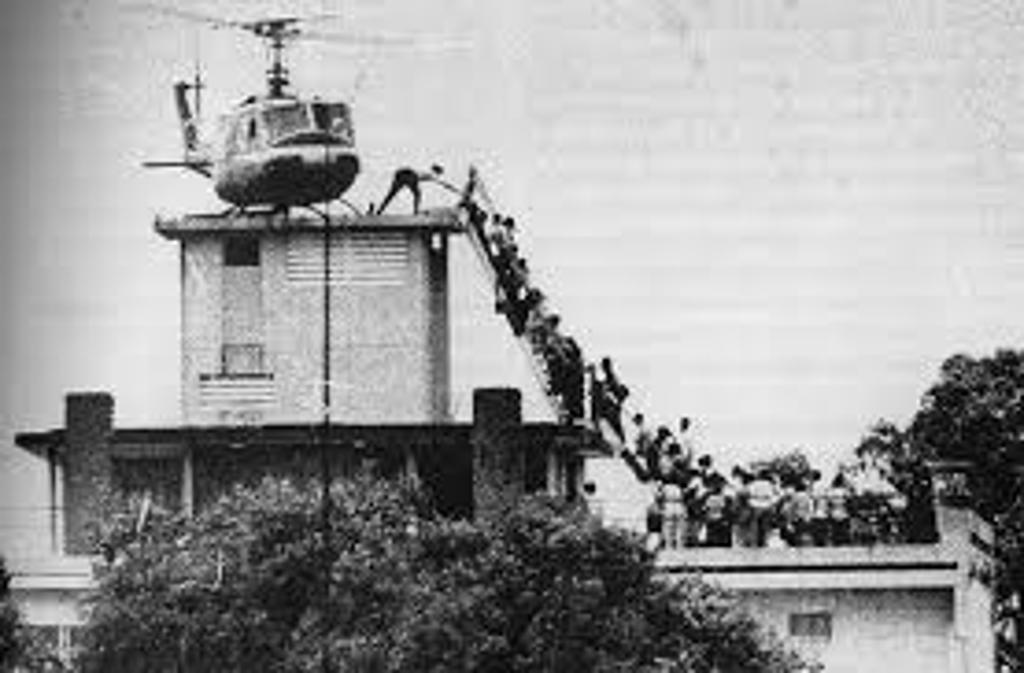 Above:  Who remembers this famous picture from 1975 and the fall of Saigon to the North Vietnamese.  People scrambled on the roof of the US Embassy trying to catch one of the last Huey choppers out of town. This signaled the end of the Vietnam War.

Vietnam was the first country I had to actually apply for a visa in advance, Most other countries allow you to get a “visa on arrival” when you land in their country’s airports.  I had to use an online service ($25) to produce a visa request letter for me, which I then presented upon landing in Vietnam. I’d been forewarned that Vietnamese Immigration processing was stuck in the Stone Age and that it would be a real cluster at arrivals. WOW, was that an understatement! Two flights arrived simultaneously so I’m guessing there were close to 400 of us lined up for what amounted to 2 windows.  You had to stand in line to RECEIVE the forms to fill out as they weren’t placed anywhere so folks could fill them in, in advance.

Once you received your forms that’s when the fun really started. People were sprawled out on the floor, standing against the walls, basically using any flat surface they could find to fill out forms.  As soon as the race was finished you lined up again to turn in the paperwork and two additional photos in addition to your passport.  Sound interesting?  Then with no rhyme or reason the immigration officers would start pulling from the pile; top, bottom and in between.  The $45 US visa cost could only be paid in cash. You handed the money over and the agent stuffed it into his pocket. I’m not saying there was corruption but I am saying it LOOKED BAD.  Roughly 2 hours later I was admitted to the Republic of Vietnam.

Once I got past the bureaucracy that I encountered at the airport the remainder of my stay in Vietnam exceeded every expectation I had. In fact, I'd highly recommend it to anyone who wanted to explore Southeast Asia. Forty years have passed since the fall of Saigon and America's decision to pull it's troops out of Vietnam, thus ending the Vietnam War, or as the Vietnamese refer to it, "The American War". Interesting how perspective can alter your descriptions and senses towards an event.

My hotel was outstanding, with an excellent breakfast offered all for less than $30 U.S.  Vietnam has a distinctly French influence, and whatever disregard I have for the French aside their cuisine is excellent and has permeated Vietnamese culture.

I was also pleasantly surprised with the level and willingness of the locals to speak English and engage you in conversation.  For whatever reasons, National pride or otherwise Thais are much more reluctant overall to speak outside their native tongue.  This baffles me though as tourism is Thailand's number one contributor to their healthy economy.

As most of you know I always seek out a gym regardless of where I'm at and attempt to stay disciplined with my workout plans. As I left my hotel to walk to the gym that the concierge recommended I passed a huge park which had a slew of folks enjoying the beautiful morning and getting their exercise in a more informal environment.  All ages were represented.

People rode bicycles, walked trails and some did a "circuit" of pull ups and a variety of stations. Many older folks were seen doing their stretching and some guys were even lifting home made weights.

The thing that intrigued me most though was the collection of people doing breathing exercises and tai chi. I sat down on a bench and just watched in silence as the slow, methodical but beautiful movements were being followed by the pack.  Their "leader" was an older gentleman that I'd guess was at least 75. perhaps 80.

When they took a water break I went up to him and said hello, "and asked him how long he'd been a coach".  He turned his back on me.  WOW, dies my breath smell or something?  I subsequently found out that older Asians will do that out of embarrassment that they can't communicate with you in English.

He motioned and a beautiful young lady came to me, and said hello.  She explained to me that the sinsei was embarrassed that he couldn't communicate with me.  How humble is that?  Here I am in his country, can't speak a lick of Vietnamese. I'm the one who should be embarrassed.

She was the second in command and was a very engaging person who was eager to know about sport and fitness in the United States. We hit it off and had a great time.  It's amazing how a smile and a willingness to say hello to someone can open so many doors.

One of my favorite subjects in Asia is traffic. I swear if I ever complain about traffic back home again, somebody please hit me.  You have no idea the level of gridlock that occurs over here in the mass of humanity where cities are routinely well over 10 million people. Even the cities that are smaller simply don't have the infrastructure to handle the logistics...and traffic enforcement is NIL.

Nobody beats Manila, Philippines for gridlock but on the other hand Ho Chi Minh City, Vietnam is the largest amalgamation of motorbikes on the planet.  They whiz around in all directions, and I do mean ALL directions.  On the streets,  thy can opt to go one way way (in the opposite direction) from the main flow of traffic, and if that's not confusing and dangerous enough they will even drive on the sidewalks, zipping both ways willy nilly among pedestrians.. You really have to be aware as a pedestrian or you're going down for the count.