A combo of being excited and still having my body clock out of whack caused me to wake up at 2:30 AM this morning. Today I take my tour to the Ming Tomb and the Great Wall of China. For a pretty reasonable price (ended up being 300 Yuan with buffet lunch & tip included as well as entrance to the attractions). About $55 US for all the fun I could stand.

Once again, I rode the subway into the north central side of Beijing. This time I gently nudged a guy in the ribs who was trying to bolt past me as we entered.  He backed off and I went in first.  I'm feeling like a local.  When in Rome....

I met my tour guide, a sweet young lady named Jenny and was surprised to find out that there was only one other person in the van with me, an Australian fellow named Bob.  Nice guy who was am engineer by trade as well as a historical nut.  He could have been a contestant on Jeopardy with his variety of knowledge on different subjects.

The first stop was a Chinese jade factory.  I'm not in the market to buy stones so it was of nominal interest with me but watching the craftsmen carving these intricate objects was quite amazing.  I did learn that behind Diamonds, Rubies and Sapphires that jade is the next hardest precious stone earning it the name, the "Chinese Diamond".

The Ming Dynasty and all it's Emperor's and Empresses are buried in the hills of Beijing's far north suburbs.  There are actually 12 different tomb sites scattered over about 20 miles but only a few are open to the public. Even then it's not the actual tomb because prior damage during attempted excavations have caused the Chinese government to leave the remaining tombs and their treasures intact and undisturbed.  Above, you can see me at the entrance to the tomb reception area where artifacts from previous digs are on display.

After the visit to Ming's Tomb we had a nice buffet of Chinese food and then visited the cloisonne' factory which I learned is a mix of ceramic and copper craftsmanship to manufacture ornate vases.  The skill of there artisans is incredible.  The ancient skills are only passed down from family member to family member.

The Great Wall of China

Today marked a bucket list item off my list.  Walking the Great Wall of China, one of the 8 wonders of the world. But it did not come without a price.  You could ride a cable car up and down for 100 Yaun (About $16) but I'm too proud and stubborn for that.  So, I laced up my Adidas and started the climb.

If you're wondering what that is on my head, that's my new Go Pro camera.  It's my first time using it and I forgot to turn it on on the way up. Just as well as I was huffing and puffing like nobody's business (but so was everyone else). I did however film the trek down where my legs felt like rubber from the climb.  At one time the entire Wall extended over 5000 miles across China providing a buffer from invasions, especially from the Mongolians to the north.

At the top of the wall I was once again asked by parents to be photographed with their child. It's the children who can speak little pieces of English and the parents are extremely excited to photograph them with The Foreigner. I'm beginning to like this place :-)

Some tourist attractions disappoint, but I can tell you that the Great Wall experience is a must do if you ever have the opportunity.  I'm sure I will be sore all over tomorrow but this afternoon I feel like I accomplished something. 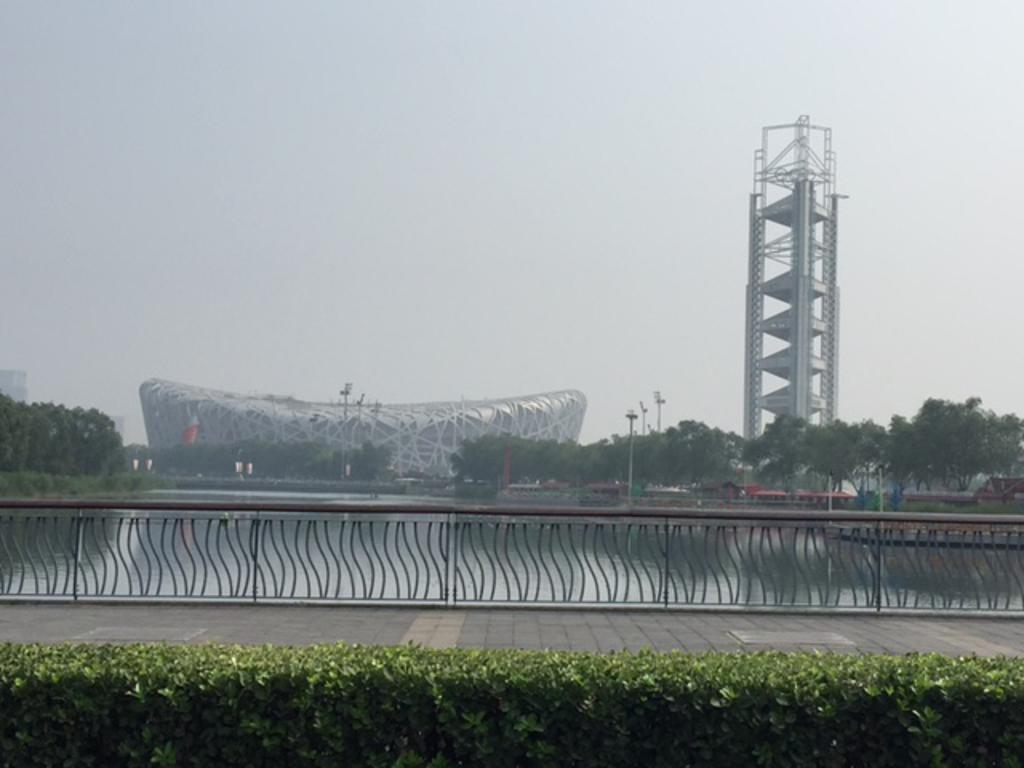 The tour kept getting better and better. When we hopped in the van drenched in sweat, my dogs were barking.  And like manna from heaven, Jenny the guide said let's go get a foot massage.  God is great, because he delivered right on time.  After soaking in some warn water and washing the feet I was never so happy to have a dude massage my feet in my entire life.  That got him a 20 Yuan tip.

As we headed back into the City we had the option of walking around the Olympic Park.  I decided against it, snapped a pic and then our day came to an end.  Jenny dropped me off at the subway station and when I hit my hotel at 6 PM, I showered and slept through past midnight.  That's why I'm up now writing this travel entry.  I hope you've enjoyed it.  Greetings from Coach