A Man of the People

I'm starting to have a quick appreciation of why Chinese are always elbowing their way through crowds.  The sheer mass of people don't allow for the exchange of pleasantries that we typically extend to others down in Texas.

My sleep is totally off as I'm on the other side of the world so I was up plenty early only to find out that my tour had been canceled for the day.  I'm typically not a guy who wants to follow a herd and usually prefer to do things on my own. However, Beijing is 23 million people.  Yes, I said 24 MILLION.  You could stuff Austin, San Antonio, Dallas, Houston and El Paso in there and still have room for Lubbock and the State of Oklahoma!

I stepped out of my hotel at about 6AM and decided to explore the streets a little and get my 2 mile walk in.  I was met by a lot of curious stares not only because I was a white boy but as I quickly came to realize my ADIDAS shoes are different than they sell here in China, and of course my size 13 flippers are a curiousity to the locals as well.

I had a couple of people strike up conversations in limited English.   "Hey, Joe",  they would flash a smile and the peace sign. Not sure what the current significance is but Asians love to throw their deuces up as a sign of greeting.  In a way it's a throwback to the love and peace era in San Francisco.  I stopped and ordered something to eat from a street vendor. There are miscellaneous carts everywhere and a sea of exotic looking choices. I'm definitely off the tourist path as almost nobody had even a few English words in their arsenal and my mandarin is non existent. I settled on what I would describe as a piece of pizza and a pancake.  It was made right in front of me and the lady put egg, ham and hot peppers into the mix, spreading it on the flat bread.  Cost: $1  Pretty good stuff!

I wasn't going to let the tour cancellation derail me though and after negotiating a  30 Yuan taxi fee down to only 20 Yuan (about $3.50 with tip) I was dropped off at the Beijing Subway station to explore on my own.  Actually, much of the extensive rail system is above ground as well as below. Beijing is a city of contrasts.  Lush green spaces in the suburbs along with incredible density in the city proper, modern skyscrapers along with incredibly well kept historical buildings and attractions almost side by side make it a fascinating place.

After a couple of minutes of head scratching I bought a subway pass looked at their almost 20 different subway lines and decided I was headed to Tienneman Square and the Forbidden City.  I changed trains 4 times to get there. I've got to tell ya'll that unlike New York's subways, Beijing's were so clean you could eat off the floors. Everyone was incredibly civil and there was not one....NOT ONE piece of graffiti  on the trains, anywhere.  The Chinese are a very orderly and respectful people.

We were packed in like sardines but it was exhilarating to say the least.  The trains are smooth and ultra fast. Body contact, which as Westerners we like to avoid, was unavoidable.  I was wedged in between a good looking 110 lb Asian lady and a guy with a belly like Buddha.  You need to be cautious of pickpockets and although I had a money belt around my waist I felt uncomfortable as someone brushed against my butt.  Of course my twisted sense of humor went to a scene from the movie, A Night at the Roxbury.  "Did you grab my ass"?  I never did pinpoint if it was a welcome advance from the lady or "Buddha Boy" copping a cheap feel.  lol

Sure we have stark contrasts in the USA, but nothing that approaches this.  There are no social programs.  If you're poor, you are dirt poor and the only way out is to be resourceful and work through it.  There are a slew of Mercedes Benz's which go for substantially more here than they do in the USA and they are sharing parking spaces with little motorized trikes (like pictured above).  Young office workers are going to work pedaling their bicycles and at the same time wearing a skirt and high heels. There is a bustle and energy, a wildness to the streets that I've never seen before.

The 45 minute subway ride was a great experience overall and definitely an inexpensive and efficient way of traversing this metropolis.  The entire trip cost me 6 yuan ($1). 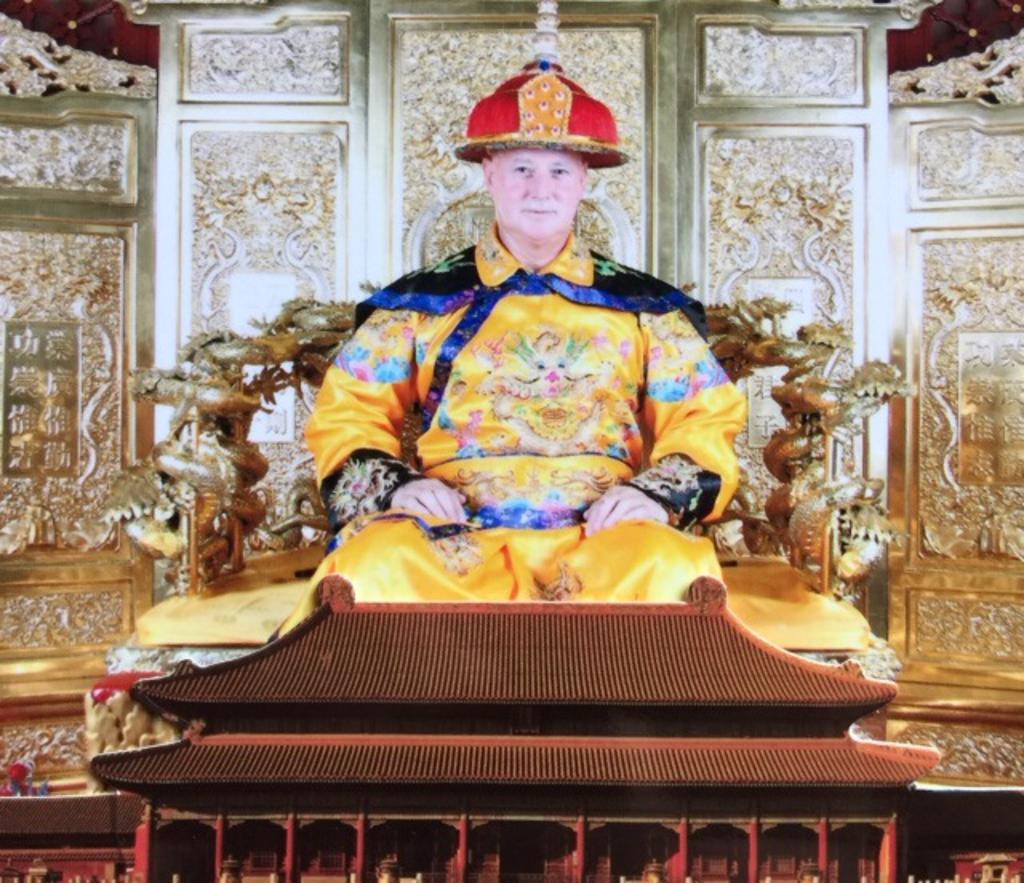 We Run This Town

One of the D1 Nation slogans is, "WE RUN THIS TOWN".  Can you hear the Jay Z beat in the background? lol   I wasn't in town 24 hours when I appointed myself honorary member of the Ming Dynasty.  (Actually, it cost me 100 Yuan, about $16 US). I look good in silk, baby.  The only disappointment is they didn't have the branded D1 logo embroidered and there was no orange silk for me to wear.  Someone will lose their head over this.

The AMAZING thing about many iconic pieces of Chinese architecture is that they were built in the period around the 1400's.  Tienneman Square and the Forbidden City I'm guessing is the equivalent of 30 football fields buildings and courtyards.  An incredible engineering feat under any conditions.

Twice today, I had a parent come up to me and have me pose for a picture with their child. Apparently old bald basketball scouts are held in high esteem here :-)  I asked my hotel attendant about that tonight and she explained that they were likely from "the province" and had never seen a foreigner before.  "The province" is an Asian term for what we mean to be country folk, farmers, ranchers and the like.  Kinda cool.

You can google up all the details about these two places but the Forbidden City was where the Emperor's once resided and was heavily fortified.

Pictured above was my dinner meal.  It's a traditional Chinese hot pot dinner in which a family or group of friends sit around the table and the "hot pot" is put in the middle, with boiling water.  You add ingredients of choice to it as you sit around and socialize, starting with the meat as it takes longer to cook.

Your choice: lamb or beef.  I opted for beef which comes presented to you in long thin strips which at first glance you can mistake for bacon. It cooks quickly (3 -5 minutes) and in the meantime you're tossing your other selections in the pot. In my case it was green onions and the biggest mushrooms I've ever seen. along with rice noodles.

I order the extra spicy broth and it didn't disappoint.  It was so hot I ordered a rare beer to wash it down.  It was enough to feed 4 people but I was alone so I left plenty of food behind.  No forks were available so it was strictly chopsticks.  I struggled with some of the ingredients and made a hell of a mess in front of me.  My waitress was obviously amused and from time to time would come by with HER set of chopsticks and help me. lol  I love it. Great dining experience.