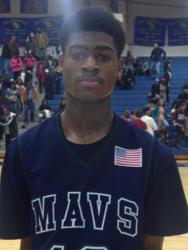 Pflugerville and Round Rock McNeil have been battling for District supremeacy for years, so you can always expect a good game between the two regardless of overall records.  McNeil stands at an uncharacteristic 11-11 entering the contest while Pflugerville has 16 wins over some quality opponents.

The teams traded buckets in the first half with the quarter (11-11) and then the half ending up tied 23-23. Pflugerville had a mini run midway through the third as they knocked down several threes (including two in a row by unsigned gunner, 2014 6'4" Nosa Ebomwonyi who finished with 14 points.  McNeil pulled even and even went ahead as 2014 Trae Dilworth showed several bursts to the rim.  Dilworth has as good a straightline speed as most any player I've seen. He finished with 10.

Pflugerville senior guard Abrian Edwards was somewhat quiet from the field. Most of his 13 points came from the free throw line. In fact with 3 minutes left in the game it looked like The Ville would coast to a double digit win but their free throw shooting was brutal down the stretch (4-12) allowing McNeil to steal the road win.

McNeil's last attempt by freshman Victor Bailey came up short and the Panthers hung on.  Bailey was the game high scoere with 15 points.  Not too many 2017 players can step on a varsity court and look the part but the 6'3" gangly guard pulls it off. He's confident and can get to the hole most any time he wants, even against veteran players. (Don't forget that Pflugerville has two D1 caliber athletes in Edwards (Texas-Pan American) and Ebomwonyi) yet Bailey was undaunted.

He's got to tighten up some of his shot selection (part of being a freshman) but he showed a great change of pace on his dribble allowing him to set up his defendder and when he got to the rim he finished with a dunk one time and a finger roll that might have made my friend The Iceman (George Gervin) raise an eyebrow. I also was impressed with his composure.

Bailey is the son of former NFL wide receiver, Victor Bailey and Olympic trakc star Tonja Buford-Bailey who is now the Texas Longhorns Associate Head Track Coach.  A nice move in for McNeil veteran Head Coach Darrell Hagemann to anchor his squad for the next three years.