The Visitmesa.com Basketball Challenge likes to promote itself as one of the best hoops tournaments in the west and a visit to host Mesa Mountain View on the first ‘complete’ day of play certainly backed it up.   The annual five- day event features 33 games with eight top Phoenix area teams and a matching group from around the country. 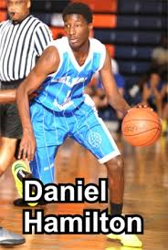 However, I find observing the under classmen in these kind of environments is the most telling, and there were several that certainly stood out.  2015 Tyler Dorsey (6-4) of St. John Bosco demonstrated why most of the country’s top teams have a strong interest in the scoring point guard.  2017 Alex Barcello (6-1) of Corona del Sol continues to impress with his court awareness, composure far beyond his experience and ability to either give it up or score.  Teammate 2015 Dane Kuiper (6-7) also was impressive in the transition game and on the defensive end.

Unfortunately, I missed the opening two games the previous night when Corona and Bosco faced each other with Corona coming away with a 69-66 victory.  Benson (6-3, OREGON commit) led the way with 26 points for Corona while MacDougall (6-9, ASU commit) added 13 and Kuiper (NEW MEXICO verbal) 12 and 6 rebounds.  Dorsey’s 25 points and Hamilton’s (6-6, UCONN commit) 20 paced Bosco. 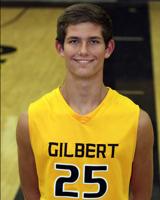 2014 Anthony Bryant (5-10) had a solid game with 15 points along with five rebounds and five assists.  I’ve seen Gilbert three times this season and if Bryant and the ‘bigs’ can continue to develop their games then coach Jay Caserio’s Tigers should be a force by state tournament time. 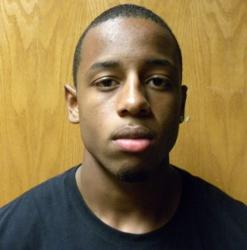 This was my first chance this season to see 2015 Jalen Jenkins (6-4) who joined coach Todd Fazio as a new face on the Red Mountain campus this year.  Jenkins is a D1 talent who sometimes played out of control last year at Mesa HS.  He showed maturity throughout the hard-fought game and he was the difference in his team's win. He's long and athletic and it looks like coach Fazio has gotten his attention.

Desert Mountain played without 2014 Will Goff (6-4) and his scoring and all-around game certainly were missed as 2014 Rondo Rhymes (5-11) and 2014 Jordan Lossman (6-6) each scored 16 points but couldn’t make up the difference.   Rhymes’ play still has me confused.  I’ve seen him four times this year and after really impressing me last year, he doesn’t seem to present the same kind of brilliance.  Hopefully, it will come as we move into league play because when he’s ‘playing’ he is exciting to watch. 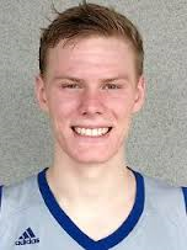 Gilbert Christian moved up to Division 2 this year after dominating in the Arizona small school ranks over the past several years.  The Knights have already played a very aggressive schedule and their match-up with Clark (Las Vegas, NV) should help them improve, d64 buzzer- beating loss, Clark is a physical, defensively aggressive team with a deep bench.

Gilbert Christian's 2014 Sam Jones (6-7) and 2014 Roberto Reyes (6-3) were up to the task as Jones lit it up in the second half (23 points) for a game-high 30 while Reyes added 17.  Jones seems to have almost unlimited range (and a green light) and although he doesn’t look like a strong defender he sure seems to get his hands on a lot of balls.  He’ll need to get stronger to effectively play at the next level.  Reyes is physically sound and his game is as well.   A lot of mid-major D1 programs could use either player.  (A couple of Gilbert Christian players to watch are 2017 Nate Graville (6-8), who demonstrated a nice touch on the perimeter, and 2016 Cameron Satterwhile (6-3), who presented a nice all-around game.)

Division 2 powerhouse Sal Pointe opened strong as 2014 Cameron Denson (6-1) certainly didn’t look like he just came off the football field.  Denson recently completed his high school football career with a state championship and a Player of the Year award. (He’ll be staying at home to play for the University of Arizona.)  But, Denson can hoop as well as he scored most of his 16 points in the opening half trailing, Dobson 45-42. Foul troubled limited his floor-time in the final 16 minutes as Dobson cruised to a 95-59 win, really turning on the jets in the second half.

The heralded 2014 Kodi Justice (6-5, ASU commit) and 2014 6'4" Ryan Richardson (Weber State) each had strong games with 18 and 21 points respectively. However, 2014 Kairee Williams (6-2) led the way with 24 points.  Coach Rick McConnell has a veteran team and Dobson brings a lot of guys who can put the ball in the hoop. If Justice and Richardson are sharing the ball, they’ll be hard to beat. 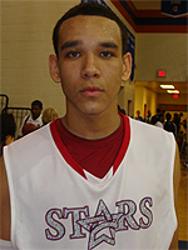 This was my fourth look at Coach Dan Peterson’s Firebirds and he has Chaparral playing with more confidence every game, proving it with a 75-70 upset.  Although Pinnacle was missing several players, you can’t take away the effort shown by Chaparral, a team which runs the floor well and plays solid team defense.  Chaparral’s 2015 Kenzo Nudo (6-3) was absolutely brilliant in the second half as he turned in a game-high 33-point effort.  Kenzo usually finds himself in the paint as Chaparral doesn’t have much size, but today he demonstrated an impressive perimeter game I had not seen.

Of course, when Pinnacle’s playing that means 2014 Dorian Pickens (6-5, STANFORD commit) is on the floor and that means Pinnacle most likely has the best player on that floor.  Pickens plays with ease and doesn’t show pressure.  His 30 points came on shots from all over the floor, but on this day his effort wasn't enough.  2014 Trey Ingram (6-0) provided a strong first half but tailed off in the second, finishing with 18 points.

There was a lot of build-up for this game featuring nationally ranked Corona but the drama never played out as Corona used 59 second-half points in a 92-69 rout of the Orange Wave.   2014 Casey Benson (6-3, OREGON commit) showed why he was the 2012-13 Arizona Player of the Year as he dominated the floor with 23 points and nine assists.

Strong rebounding allows Corona get out and run and 2014 Conner MacDougall (6-9, ASU commit) and 2015 Dane Kuiper (6-7, NEW MEXICO verbal) provide that service.  Kuiper grabbed a dozen rebounds and scored 12 points while MacDougall had a half-dozen rebounds and 18 points.  Add to that mix long range bombers 2014 Jarrett Givens (6-3) and 2014 Russ Davis (6-4) along with outstanding back-up point guard 2017 Alex Barcello (6-1) and you certainly have the makings of a team that should win their third consecutive state title this February.

Barcello, incidentally, had 13 points, six rebounds and at least a half-dozen assists.  I’ll state it right now; Barcello will be the next highly recruited point guard out of the Valley of the Sun.  As far as the Jefferson team, the Brooklyn boys sure like to shoot the three-ball.  How about 32 attempts (unfortunately making only 13) in a 32-minute game?  2016 Shamorie ‘Slick’  Ponds (6-0) shot his way to 21 points while also chasing down 10 rebounds while 2016 Curtis Smith (5-11) added 17 points. 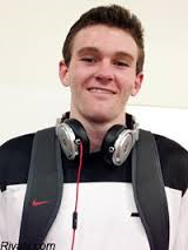 This was another ‘big time’ game as the host school came ready to play.  And, the player who came most ready to play was 2014 Payton Dastrop (6-9, BYU commit).  Among the nation’s best big men, Dastrop can do virtually everything and he’ll be a hard to guard 4-spot player at the next level (and perhaps beyond).  His opening eight minutes demonstrated a complete game from powerful dunks to 3-pointers and inside put-backs, but a second (questionable) foul found him on the bench for the rest of the half.

At this point, it looked like St. John’s 2014 Daniel Hamilton (6-8, UCONN commit) and 2015 all-everything Tyler Dorsey (6-4) would take over.  It never happened as Mountain View played patient ball leading 38-34 at half.  When the big guy came back for the second half his supporting cast really gained confidence and when 2014 Andy Session (6-1) beat his man to the basket for a lay-in with only a second left that was pretty much it for the highly regarded California team; 66-64 Mountain View Toros.  Dastrop finished with 18 points on 8 of 13 shooting and15 rebounds while 2014 Austin Denham (6-2) added 18 and Sessions 14 (plus 8 assists).  Hamilton paced St. John’s with 23 points while Dorsey added 22 points and 2016 Vance Jackson (6-8) 14 points.

(NOTE: In the opening game of the tournament Dastrup had 15/11 with Denham and Sessions adding 17 and 15 points, respectively, in an easy win over Sal Pointe Catholic 76-50.)

Two future collegiate teammates found themselves face-to-face in the final game of the day as 2014 Dalton Nixon (6-8, BYU commit) of Orem and 2014 Jake Toolson (6-5, BYU commit) of Highland met at center court.  Nixon, who has a nice soft touch in a mid-range game, may have taken a 41-29 lead to the locker room at half, but Toolson, who truly has unlimited range, finished the strongest closing with 39 points for a 79-70 OT Highland win.  Both Nixon and Toolson are physically mature kids who should fit right in at BYU.