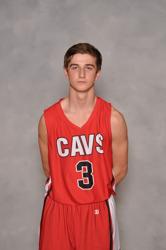 Lake Travis came into Westlake's gym and showed them who was boss from the opening tip. Junior Tate Searle scored a game high 22 points giving the Chaps the business in the 2nd quarter where he knocked down 4 three pointers.  The Cavaliers got strong performances from two additional juniors as Sean Wimbush added 16 points and Brad Budde provided excellent hustle throughout.

The host Westlake squad got 16 from Junio forward Lucas Goldberg and 16 from Texas A&M bound senior PG Chase Carlton.  I was extremely disappointed in Westlake's effort and expected more empotion from them after watching them play hard in last week's Westlake Holiday Classic event.

The obvious difference in the game was Lake Travis' patient extra pass offense which allowed them quality open looks and quite frankly, Westlake's one on one "willy nilly" play.

Searle a razor thin guard was en fuego in the first half as he buried Westlake, hitting almost every open look.  He'll be a player to watch on the high academic scene as he's sporting a 107 average along with a 31 ACT and 2140 SAT score.