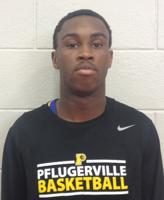 This was a good match up between coaches who are familiar with each other and players who play summer basketball with and against each other. Both teams like to run and have quality athletes. The first half ended with Pflugerville leading 33-32. The game was as close as the score indicated.  The third quarter saw Pflugerville go on a 11-1 run and push out to as much as an 11 point lead.  (At let) The Panthers 2014 post Darren Henderson is having his second big game in a row. as is 2014 wing Nosa Ebomwonyi.

Early in the 4th with Pflugerville threatening to run away with it, 2015 forward Celneque Bobbitt scored 8 straight points to bring Heights back into range. Harker Heights is forced to scramble on defense so we'll see if Pflugerville's ball handling can stand up to the pressure. HH has narrowed it to a 7 point game as each team has two of it's stars fouled out. (P'ville-Henderson, HH, Josh Delaney). The bottom line is that the Panthers hit free throws to close out HH.  Hard to come back when you take care of your business at the line. 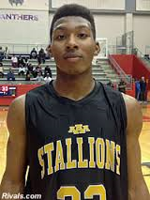 Much like yesterday's effort, the 3rd quarter was kind to AAA Academy as they broke open a close game and opened a 12 point lead.  They cruised to victory in the 4th as Westlake simply did not match their energy.

Unlike yesterday's match up with A&M Consolidated, AAA limited 2014 G Chase Carlton's opportunities to penetrate to the goal.  Carlton finished with 15 points/6 rebounds and 2014 G Luke Rowan had 12 but it was not enough.

2015 G King McClure gets most of the attention as he should. He finished with 20 points/6 rebounds after being held to only 5 free throws in the first half. Even when missing his shit looks good. However, don't overlook 2015 G Tyler Singleton, a legitimate prospect, who's long, lean and smooth both off the bounce and from the perimeter.  He had 9 points/4 rebounds in the win , while senior G Gary Breaux added 10.

This contest started out with Strake Jesuit picking apart Wagner with precision back door cuts, and efficient shooting due to great shot selection.  They led by 15 at the half, and then the storm hit.  The 3rd quarter was all Wagner as their press caused havoc.  The 3rd quarter ended with Strake clinging to a 49-45 lead. Strake was able to withstand Wagner's onslaught and iced the game at the free throw line.

Wagner was led by Senior G Clint Lewis who had 19 before fouling out and they also had 12 from Senior Diondre Hunter who also fouled out.  Strake was led by Senior post Dylan Livit who had 14 points, most of them around the goal on nice looks from Senior G Brian Doyle.  Doyle had 15 points and is clearly the glue of this Crusaders squad.

The first three quarters belonged to Willowridge.  They had better energy and effort.  However going into the 4th, St. Stephen's turned it up and overcame a 46-38 deficit to win th game at the free throw line.  St. Stephen's was led by (At left) 2014 Albert Almanza (Sam Houston State) whose game reminds me of Manu Ginobili's in that he's got a little bit of everything mixed in with an excellent basketball IQ.  He had 24 points in the win.  2016 Jarrett Allen is a budding 6'9" star. The 15 year old runs the floor well, has good hands and is super long.  He had 16 points/15 rebounds.

Willowridge was led by 2015 G Deshawn Jackson with 18 points and senior guard Emory Lewis who chipped in with 13.