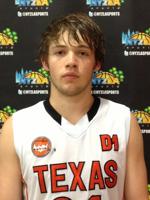 (At left: Chase Carlton) The Westlake Holiday Classic in it’s 4th year of existence has quickly become one of Texas’ premiere holiday prep basketball events. What makes this tournament really special is that the proceeds go to benefit Ronald McDonald House Charities.  The tournament has a 16 team field, including 7 teams ranked in the top 25 of their respective classes in the State of Texas. The opening game featured the host Westlake Chaps and they did not disappoint the home crowd.

Westlake came out of the gate on an 8-0 run to begin the game and never looked back.  Consolidated fielded a young group with two freshman guards and soph transfer from Bryan High, Trey Pulliam against the Chaps experienced backcourt and it was a bad match up.  2015 G Derrick Dick led the Tigers with 16 points. He also had a great season at receiver for the football team as well.

There is no question that 2014 Westlake PG Chase Carlton has made himself a legitimate player.  He’s always worked hard but now he’s added the finer points to his role as a PG, making the correct entry pass, using an effective jab step and just flat out working harder than anyone else on the court.  It should be interesting to see what happens when he heads to Texas A&M next year.  He had 31 points/6 assists in the win, tying the third highest scoring game in the history of the star studded event.  2015 G Harrison Hackney added 13/4 rebounds in the win. 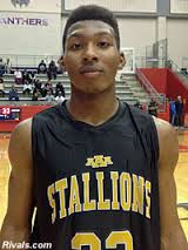 Arlington Seguin held a one point half time lead over AAA Academy at the half. In fact the game was nip and tuck to the end of the 3rd quarter.  As the game entered the 4th quarter though AAA’s multiple scoring options proved too much to handle as they pulled away for the 13 point win.

AAA junior G King McClure is simply REALLY GOOD.  He scored a tournament single game tying record of 34 points. McClure has as good a body control as any guard in the country in the Class of 2015. He has ridiculously deep range and can pull up from anywhere on the floor, elevate and knock it down. He’s so adept as a scorer you really don’t see his handles.  He’s strong with the ball though and also made a couple of high level passes. It’s not hard to see why schools like Indiana, Florida and Kansas have already offered.  Senior Gray Breaux added 18 for the Stallions in the win.

Seguin was led by Senior G Nicko Boleware who has excellent court vision and promising 2016 G 6’4″ Joel Parrish who rebounded hard, finished around the goal and knocked down shots. 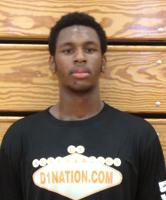 Harker Heights was clearly the more athletic team but Coppell kept hanging around mainly on the gritty play of Senior G Cody Carver (19 points) and Senior post Josh Feitl.  There’s no disputing the senior leadership in Heights’ backcourt as the Delaney Brothers are physically and mentally tougher than most anyone they face. Cameron is headed to the University of Denver (Summit) while Josh joins his sister Angela at Sam Houston State (Southland).

Cameron Delaney had a nifty double double with 13 points/10 rebounds, Josh Delaney had 9 points/6 assists, and 2015 G D’Angelo Streeter chipped in with 16 points.  (At Right:) 2015 forward Celneque Bobbitt Jr is showing excellent improvement as he’s now able to put it on the deck at 6’6″ . Bobbitt had 12 points and was always in the mix around the 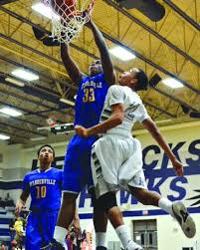 Clear Lake senior Drake Green (Abilene Christian) was a handful.  He’s athletic and uses the backboard extremely well when he slashes to the rim. He finished with 18 points.  However it was 2014 G William West who was most productive for the Falcons as he had 23 points, 18 of them coming in the second half.  He can score in a variety of ways.

The difference in this contest was Pflugerville’s work on the boards as they pushed their lead to 11 in the 3rd quarter. 2014 F Darrin Henderson had a career game with 25 points/6 rebounds.  Many of his buckets were layups off slick dimes from 2014 G Abrian Edwards who’s looking like a steal for Texas-Pan American as he had 12 points/7 assists, including two thunderous dunks. 2014 wing Nosa Ebomwonyi is one of the area’s top unsigned talents had 16 points/6 boards in the win.