The D1 Nation Recruiting Service based in Austin, Texas has for the last two years partnered with Danny Granger AAU Club to give additional exposure to players in New Mexico regardless of the classification or AAU affiliation.  We know is a subjective business. We have made our ranking based on performance in high school and AAU games,  showcase events, attitude and potential to grow, improve etc. In the senior and junior class is easier to evaluate because many of the players played on their varsity team and most played on the AAU scene.  There are times local ranking services see a player much higher because the performance with their high school team. However, there times that some players struggle against tougher competition like AAU or at showcase events.  We hope this assists college coaches in evaluation the talent in New Mexico. These ranking will be displayed on the D1 Nation Recruiting Services website, which recently went over the 3 million mark in hits. It also one of the recruiting services that is free to college coaches. We hope the ranking make players work hard on their game and as result make their high school team better. It should be an exciting 2013-2014 high school season in New Mexico.

1.       Jordan Jones Sandia HS (Albuquerque, NM) 6’4” wing – Jordan is very athletic, currently playing quarterback & wide receiver on the football team. He had the second highest BAM score with 279. He has a lot of potential to make a positive difference offensively and defensively. He had a very good AAU season and opened a lot college coaches’ eyes. He had two very good showcase performances this fall. He has committed to a D1 school, Mississippi Valley St.

2.       T.J. Holyfield Manzano HS (Albuquerque, NM)  6’7” post – T.J. is developing into a nice post player. He can hit the 3 and finish inside. He has good anticipation when blocking shots. He needs to become the leader of his team and improve on his inside moves. If he does those things he could be the top player in the state.He is getting interest from D1 and D2 schools.

3.       Joe Anaya Valley HS (Albuquerque, NM) 5’11 guard – Joe is a tough hard nose player. He is always making things happen offensively and defensively. Joe is a very good shooter and can create his own shot. He's not afraid to take the big shot. He is the type of player coaches love to have because of his energy level. Joe will definitely play at the next level.

4.       Kevin Saiz Cibola HS (Albuquerque, NM) 5’11 guard – Kevin had a good AAU season, playing against some of the country’s top guards. He was the best ball-handler and point guard for his AAU team. He will be one of the top 3 point shooters in the state. He had good court vision and does a great job hitting the open man. He is quick and is strong defensively. He had the 3rd highest BAM score with 270. He is getting some D1 and D2 college interest.

5.       Tim Brennan Sandia HS (Albuquerque, NM) 6’5” small forward - Tim has a good mid-range jumper. He can beat you off the dribble. He does a lot of the dirty work under the basket by getting a lot of put backs and rebounds. He is a very good multi-sports athlete- plays wide receiver on the football team. Tim could be a great player at the next level but needs to improve his ball handling and outside shooting.

6.       Cesar Nava Roswell HS (Roswell NM) 5”11 guard – Cesar is a very athletic guard who can create scoring opportunities for teammates and himself. He should be the top player in 4A statewide. He is such unselfish player. If he gets more aggressive and selfish offensively, he could be the top scorer in the state.

7.       Adonis Saltes  Valley HS (Albuquerque, NM)  6’1” guard - Adonis is very athletic basketball wise. He sees the court well He can score from outside and can take strong to the basket.  If he improves defensively he could be a candidate for the top player. He currently has an offer from Utah St.

basketball-wise in New Mexico. He can score with his flying dunks and then turn around and hit the 3 pointer. He has the potential to be the best player in New Mexico if he can play consistently with more effort.

9.       Austen Drake  Hope Christian 6’5 (Albuquerque, NM) Austen should be the top player in 3A statewide. He is getting stronger offensively and defensively. He needs to shoot the ball more because he has good shooting range even from the 3 point line. He is a great team player.

10.    Adam Cumber Sandia HS (Albuquerque NM) 6’0 guard – Adam is one of the top shooter in the state. He has the capability to lead a team through his example.

11.    Tate Shelly Cliff HS (Cliff NM) 6’7 small forward – Tate is a player that many people don’t know about. He is very athletic who can shoot the 3’s and take it to the basket strong. He is a very good rebounder and defender. He is also one of the country’s top rodeo team ropers. He finished strong in the AAU season this summer.

12.    Seth Warfield  Volcano Vista HS (Albuquerque, NM) 6’2” guard – Seth is probably the toughest minded player in New Mexico. He can shoot outside and finish around the basket. He is athletic enough to guard a point guard or small forward. He could be the surprise player in this class.

13.    Bobby Ray Sisneros Espanola Valley HS (Espanola NM) 6’3 guard – Bobby Ray is a slashing type player who make things happen offensively. He is also has the long arms to make it difficult for offensive players. He could challenge for the top player in 4A.

14.    Hiram Gleason  Shiprock HS (Shiprock, NM) 5’11” guard – Hiram is a hard working point guard. He plays hard all the time. He can score inside and outside. A great team player

16.    Ryan Ashbaugh Sandia HS (Albuquerque, NM)-6’8” post – Ryan is a hard working big man. He had good post moves and runs the court well. He is a solid defender

17.    Chris Sanchez Los Lunas HS (Los Lunas, NM) 6’1” guard – Chris is a double digit scorer. He can shoot the 3 and has a good mid-range game. He is a top multi-sport athlete , one of the top defensive backs/wide receivers in the State

18.    Jo Jo Brooks Atrisco Heritage Academy (Albuquerque NM) 6’1 guard – Jo Jo is a very athletic guard who can hit the 3 and also finish around the basket. He is a strong defender. He could easily be a top 10 player but has played very little AAU ball to see how he would play against better competition.

19.    Brandon Holland Los Lunas HS (Los Lunas NM) 6’3 Wing – Brandon is a very strong and aggressive player who can take to the basketball and guard a big man. He is also a big time football player.

20.    Eric Lee Volcano Vista HS (Albuquerque NM) 6’5”- Eric a hybrid type player who can play inside and outside. He is a slender and athletic player with long arms who can defend and rebound. He can score in different ways. He is a player who can end up in the top 10.

21.    Christian Mackey Kirtland Central HS (Kirtland NM) 6’4” small forward – Christian is a big body player who can rebound and score around the basket.

22.    Kamal Cass Clovis HS (Clovis, NM) 5’10” point guard- Kamal may be the state’s top multi-sport athlete. He is the state’s top running back and 2012 Gatorade Player of the Year. He plays point with a lot of control offensively and defensively.

23.    Jake LaMay Capitan HS (Capitan, NM) 6’8” post – Jake is just starting develop. He plays at a 2A school. He would easily start on any 5A team. He is a big body player who can finish around the basket. He is also a strong rebounder offensively and defensively. He is a player to watch.

24.    Colton Lewis  Belen HS (Belen NM) 6’1” guard – Colton can shoot the 3’s and aggressive defender. He is a player that lead a team offensively and with his scrappy play. 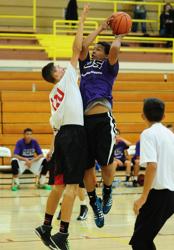