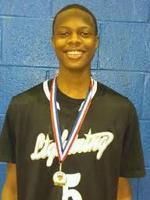 Since the freshmen receive significantly less media exposure than the Class of 2013 or 2014, you may not have heard about some of the best players in the Class of 2015. That's where we come in at the D1 Nation. One player who is highly skilled and advanced as a freshman in high school, and still flying under the radar is Mohamed Touray.

Touray attends Wings Academy (NY) and plays AAU basketball for the NY Lightning. He's well put together at 6’2 and weighs 170 pounds. The lanky combo guard uses his length to finish around opposing defenders. In transition, Touray is a strong finisher with both hands and likes to drive baseline in a half court set, where he uses a floater effectively. He shoots the ball well, especially from three-point range, but will need to work on having a quicker release. Since he’s only a freshman, he’s definitely undersized for a college athlete, but if he can add some weight and strength he could be effective at the next level. His rebounding isn’t terrible, but he has a lot of room for improvement. Boarding could be the skill that sets him apart from other guards in his class. Touray has a big upside and a lot of potential; definitely a kid worth giving some looks.

It’s still early in Touray’s basketball career, therefore he has plenty of time to start receiving major Division 1 interest. Boston University is the only school expressing interest in him at the moment, but if he is able to improve on the things I listed above, he could be a nice under the radar prospect.