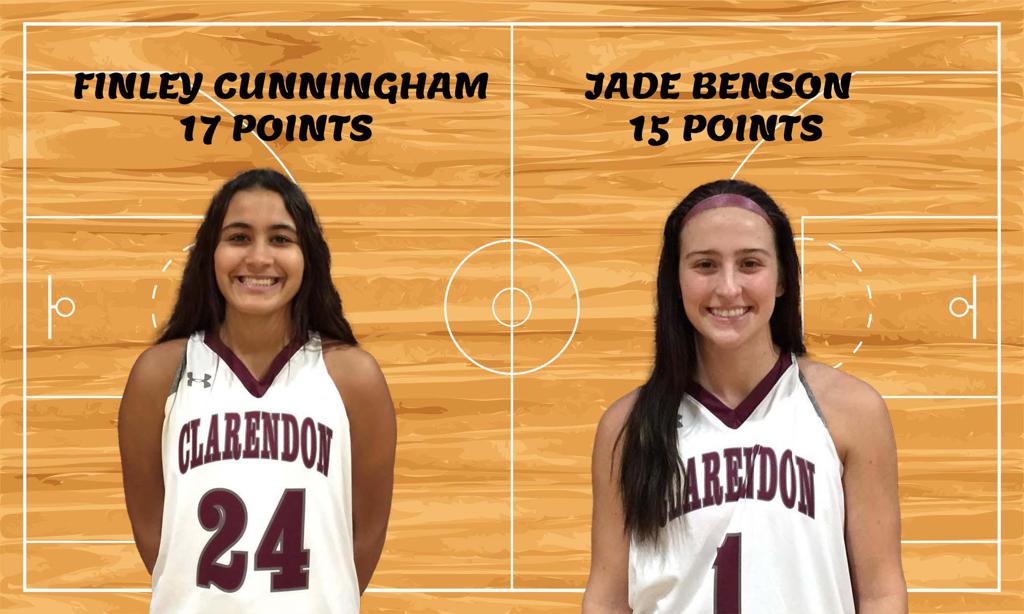 After a listless loss to Vega earlier in the week I was quite critical of the effort from Clarendon.  I couldn't wait to get back home to give them a well deserved pat on the back. It was nice to see a much more spirited effort this evening as they downed the Quanah Indians 52-35.

Quanah was not the same quality opponent as Vega but Clarendon took care of business and soundly beat a team they should beat.

It was barely a minute into the game when Senior Ashlyn Crawford dove for a loose ball, something she did twice, bring a smile to my face....as did Madison Smith, while Senior Jade Benson threw a cross body block to deny a basket and Sophomore MaKenna Shadle drew two charges.  That kind of effort was missing from Tuesday's loss.  Big props to the girls for getting those floor burns I was talking about!

Everything starts on the defensive end as mentioned above and for much of the game you could see that Coach Conkin must have stressed ball movement and improved spacing during this week's practices.  Senior Jade Benson (2) and Sophomore Finley Cunningham (3) both got their looks from beyond the arc and sunk corner threes.  That was something that was completely absent in the Vega game.

Benson had 15 points/4 boards while Cunningham led all scorers with 17 points. Senior Crawford had 6 steals and really had her motor running this evening as did Madison Smith with 5 steal/5 assists.  The bench also had a chance to get valuable minutes and you can see signs of them gaining confidence. There's nothing like game minutes to do that.

There were still way too many turnovers (19) than can be acceptable and it would really help if the other ball handlers continue to develop to be able to give Crawford a rest from the constant double teams. Tonight was a step in the right direction though, one building block at a time.  Nice win to all the players and coaches. That's my one and only scolding for the year.  Enjoy your season, play hard and have no regrets.  A win makes everything feel so good. Go Broncos!

Yesterday at Lowe's one of the players mom from the JV approached me in the store and asked if she could speak to me for a moment. I thought she was going to light into me for criticizing her baby.  That wasn't the case.  She said can you explain pressing to me.  I paused for a moment because it's very easy to forget that not everyone may have the insight that a coach may have.  After all, I can read plans for a building but not to the level of an architect, nor can I lead a congregation in sermon even though I know some of the words.

I conduct a high level three hour coaching clinic on pressure defense.  So, I'll do my best to reduce it to the basics in a couple of paragraphs. In a nutshell, pressing or pressure is designed to do just that.  To ideally force an opposing player into a poor decision which leads them to making a physical or mental error while under duress. Ideally the goal is to force a turnover. There's not always instant gratification though and this is where the defender's lungs are burning and their mental toughness is measured in how tough they remain.

But it's not quite as simple as that.  Against a weak team or weak ball handler you may cause a quick turnover in the backcourt.  However, let's assume the two teams are fairly evenly matched.  The first pressure or "trap rarely ever causes the turnover.  An experienced point guard will usually get rid of the ball before the double team arrives.  Very good players can smell this a mile away. Now the defender must HUSTLE to recover.

At the college level and in states that have a shot clock the token pressure may be applied so the offensive team doesn't get to run it's offense as effectively as they may only have 8-12 seconds left on the shot clock to get their shot off.  Another reason to trap in the backcourt is to get the ball out of the best ballhandler/decision maker's hands.  As the game wears on the primary ball handler will become physically and mentally tired and make a mistake in the 4th quarter, that they would never have made in the 1st quarter. It's like a boxer who takes punches.  The damage is slowly accumulating.

Taking the above into consideration the pressing team must be in superior physical condition as they now must expend additional energy in recovering as the offensive team now has "numbers" and an offensive advantage.  Depending on the skillset of the opposing team this can often result in layups, so it's imperative that nobody is slacking and getting back.  (This was an observation that annoyed me on Tuesday).

Often times it's not the first trap that causes the turnover.  When the defender hustles to recover they may then enter their second effort at trapping and sometimes a third.  Those traps will occur at different spots on the floor that are quite vulnerable.  The midcourt line and sideline.  The corners and the end line.  It's about limiting the other teams from feeling comfortable doing what they've practiced all week.

I could go on and on with subtle nuances and derivatives that would bore most people, just like I don't want to sit in a discussion of computer code.  I just want my app to work.   I hope this gives the casual viewer and the moms and dads a little more insight into the why's and what to look for so the game will be more enjoyable to you as you're watching your son or daughter play.  Happy Hoops- Coach Ivany