Photos courtesy of www.craigstidham.com   Thank you!

P.S.  Does anyone have a photo of Jordan Herndon?  If so, please email to me at D1Nation@aol.com   Include his name in the subject line.  Thanks 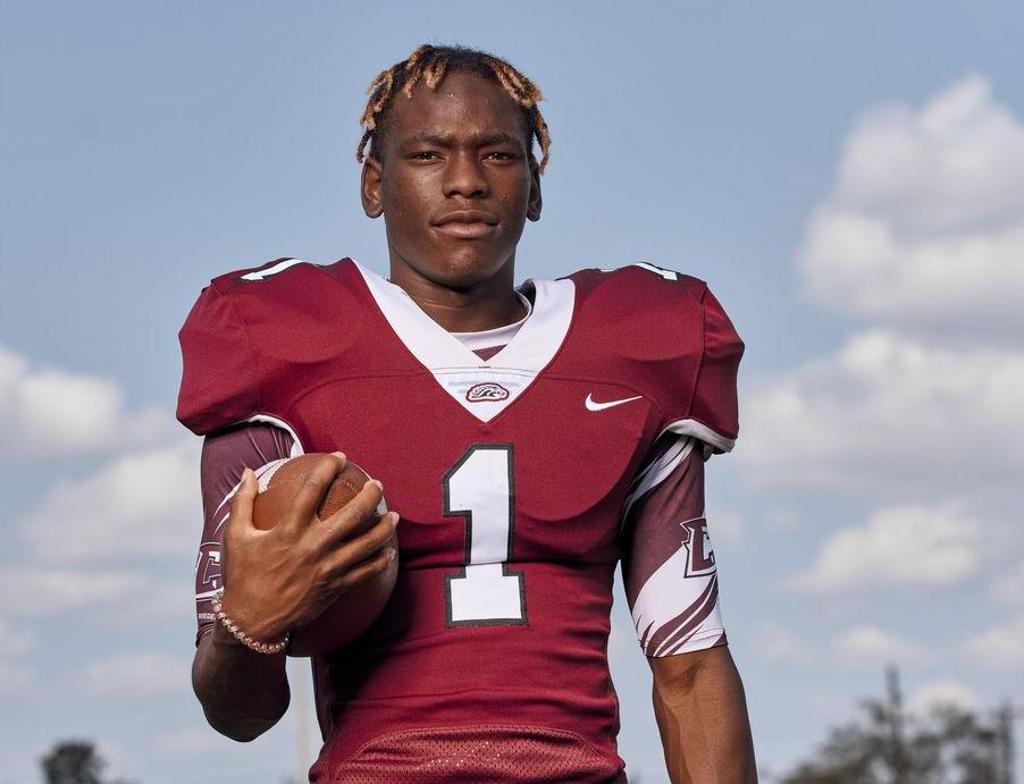 After last weeks hiccup against Vega and their first loss of the season I fully expected Clarendon to come out with a vengeance last night and to stomp a mud hole in Memphis.  I should have known better.  You can never handicap rivalry games.  The two towns are only 26 miles apart and there's always a lot of pride and bragging rights among the kids and the adults about this annual game.

This game would be played primarily between the 25 yard lines with very few scoring chances.  The defenses were solid and had the respective offenses number for most of the game. In short, it was a dog fight.

The first half saw both teams slog it out on a perfect 73 degree Texas evening.  The Memphis offense isn't particularly imaginative but they played to their strength behind their big corn fed offensive line and combo of a quick slotback and big bruising running back. Between the thunder and lightning backs they put together a second quarter scoring drive for the only score of the half.

Clarendon picked up where they left off last week  with a few untimely penalties causing their drives to stall.  There were two first half drives for the Broncos that resulted in scoring chances, but on three occasions, different Clarendon receivers squandered sure touchdown catches from Junior QB Brock Hatley. His end zone throws were on the money but slipped through his receiver's hands. The teams went to the locker room with the home team Memphis Cyclones ahead 6-0.

It wasn't until midway through the 3rd quarter that Clarendon caught a spark. A big sack by #55, Junior Gaven Nazario gave the Broncos life. The 300 lb Junior literally pancaked the memphis signal caller. It backed Memphis up and forced a punt from near their end zone. Junior Lamarcus Penigar returned the punt 27 yards to the Memphis 23 yard line.  Senior Aaron Roys followed with an 18 yard run to the 5 yard line.

Penigar tried the QB keeper around right end for a 7 yard loss and on the next play he pitched it left and Junior RB Jordan Henrdon walked into the end zone untouched. The Broncos are on the board! Going for two, Penigar tosses the two point conversion to Sophomore Sylvester Ballard in the short corner of the end zone to go up 8-6 with 5:37 left in the 3rd quarter.

It seemed Clarendon was really beginning to surge and forced another Memphis punt but for the second week in a row there was a fumble on special teams. Last week it was a kickoff and this week it was a punt muff. Got to clean that up going forward, guys.

The 4th quarter started with an excellent defensive stand by the Broncos.  When they got the ball back they mounted the top offensive drive of the day with Sylvester Ballard getting three consecutive carries for 40 total yards. He softened up the Cyclones D nicely and Penigar who was now at QB carried himself off tackle and turned it upfield for a 35 yard run to the 2 yard line. Herndon smashed his way in from the two yard line for his second TD of the day with 8:30 to play in the game.

The defenses traded stops and with 3:39 to play Memphis began what they hoped would be a game tying drive from their own 29 yard line.  The Cyclones ran hard down field and were within striking distance with only 9 seconds on the clock.  I had moved directly behind the Memphis bench at this point and there was confusion from the Cyclones staff as one coach was asking for the ball to be grounded and another realizing it was already 4th down.

Shades of Tampa Bay and Tom Brady! In the confusion Memphis committed a motion penalty which is an automatic 10 second runoff.  It was an anticlimactic ending to a really good Texas High School Football game!

Statistically, the Broncos had big games from Ballard who had 9 carries for 85 yards, and Herndon who did the heavy lifting between the tackles with 10 carries for 35 yards and the games two scores...

Totally unrelated to Clarendon football but perhaps of interest to some of you are my hearty congratulations to Alex Caruso of the Los Angeles Lakers.  Along with my son Chip Ivany I have trained, mentored and or coached 15 NBA players.  Alex is the first to win a title.  He's also the first Texas A&M Aggie player to win an NBA chip in the last 40 plus years. His father, Mike Caruso was the star PG for Eddie Sutton at Creighton in the late 60's/early 70's.