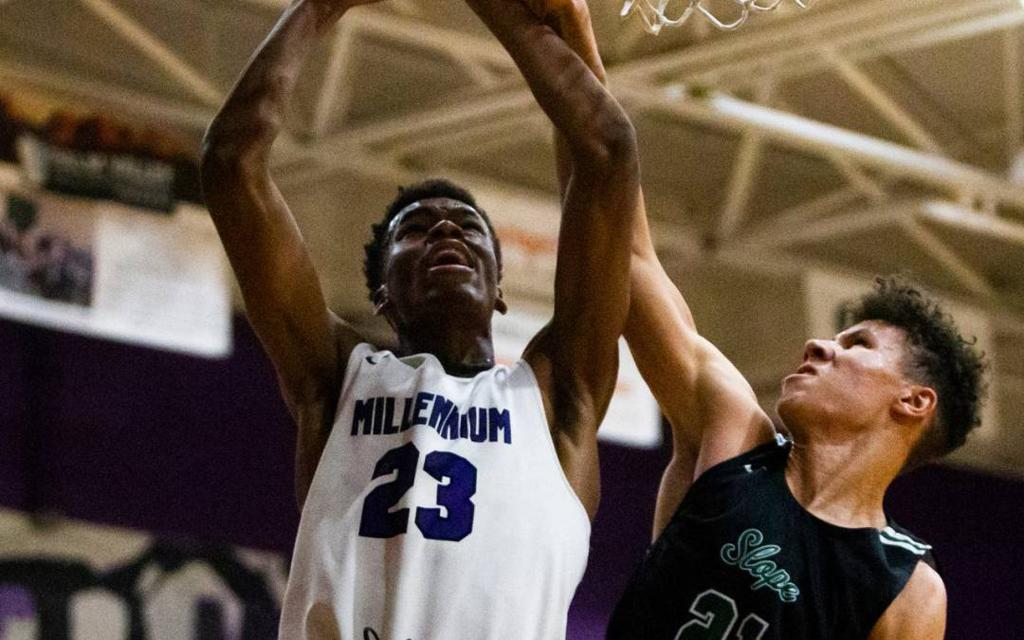 Class of 2021
DaRon Holmes Jr (6’9” – Millennium) -- Millennium has played somewhat of a national schedule so I haven’t see Holmes in action this year, however, he is unquestionably the top Arizona player in his class.  Previously, basically just a dominant interior player, reports state he has moved his game out as well to complete the package.  His numbers after 15 games are 21 ppg and 10 rpg. He certainly is the best big-time Arizona prospect since Marvin Bagley III when he played his freshman year at Corona del Sol.  (No offense to Nico Mannion and his great skills.) He holds offers from Arizona, Virginia and Kansas.
Duke Brennan (6’10” – Perry) – Brennan will take up a lot of space in the paint at the next level.  He’s already carrying a big body and looks comfortable on the block.  He has a nice mid-range touch and should be a mid-major level recruit by next fall.
Carson Basham (6’10” – Sunnyslope) – Basham takes up even more space than Perry’s Brennan.  He has good hands and can run the floor and certainly is dominant in the paint.  He should standout more on the offensive end (I saw him play early in the season so perhaps that has changed).  Basham is a candidate for a number of future D1 offers. He currently holds offers from Texas Christian, and a slew of mid major like NAU, Loyola Marymount, UC-Riverside.
Owen Shaw (6’5” – Arcadia) – Shaw is a stat-stuffer who does everything well, despite not being overly athletic.  He has an excellent mid-range game but is comfortable at distance. Shaw understands the game, plays with confidence and doesn’t back-down defensively in the paint. He should find himself in a D1 program in a couple of years.
Trent McLaughlin (6’4” – Basha) – The long wing played only 5 games in the first half of the season, but came off the injury averaging 20 ppg while shooting 40% from behind the 3-pt line.  McLaughlin doesn’t seem to force things.  He’s athletic and should draw some D1 interest over the next 12 months.
Justice Jackson (6’ – Millennium) – As in the case of DaRon Holmes, I haven’t seen his teammate Jackson this season but based on last year’s games I attended, he is one of the top PGs in the class.   Jackson has a number of mid-major offers, and is verballed at Eastern Washington.
Jason Kimbrough (6’ – Mountain Pointe) – Kimbrough is solid in all phases of the game.  Great with the ball and can score from multiple locations (13 ppg) but likes to penetrate.  He certainly can create issues on the defensive end as well.
Moses Demalek (6’6” – Paradise Valley) – Demalek has a big-body and is strong, but he’s also athletic and very comfortable on the perimeter.  He’s an efficient scorer (12 ppg) who gets to the foul-line but is also a good passer and a solid team player (5 apg and 7 rpg).  There seems to be promise of a D1 future.
Bailon Black (6’4” – Ironwood) – Black is an electric shooter when he’s on a roll.  He defends and plays hard from buzzer to buzzer.  Black is long and athletic and is comfortable with the ball in his hands.
J.J. White (6’3” – Ironwood) – White is very similar to teammate Black and is a complete player. It’s always nice to see guys that can fill up a stat sheet while playing ‘team’ ball.
Wyatt Bell (6’1” – Paradise Honors) – Bell has nice ball skills and is quick.  Shooting 40% from behind the 3-pt line while scoring 15 ppg. Bell gets after it on the defensive end as well.
Tampa Scott (5’10” – Gilbert) – Ultra-quick player who creates problems for the opposition at both ends of the court.  Kind of a streaky shooter who plays aggressively.
Max Majerle (6’4” – Arcadia) – Majerle is coming off a knee injury suffered at the beginning of last season.  He’s a high level athlete who can guard smaller players on the perimeter.  Majerle is scoring at a 15 ppg pace but is also a volume shooter. He can be an explosive player.
Patrick Herrera (6’1” – Skyline) -- Herrera’s Skyline team has a lot of guns, but when he’s open on the perimeter his teammates know where to go.  A big-time, efficient shooter (12ppg) who doesn’t make a lot of mistakes with the ball.
Steve Cervantes (5’10” – Mesa) – Looking for a shooter?  Look no further than Cervantes (20 ppg).  Although he’s small, Cervantes plays with a big heart and when he’s open, there’s a good chance he’ll connect.  He has excellent ball skills and with his shooting touch he could play at the next level.
Paris Woods (6’5” – Apollo) – Woods appears to be struggling shooting the ball after missing the first 8 games.  He’s still a prospect, but he hasn’t seemed to have improved since his freshman season and he’ll need to turn things around quickly to keep recruiters interested.